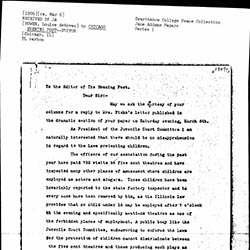 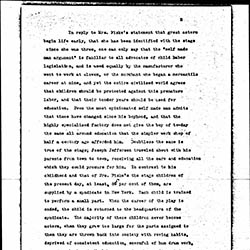 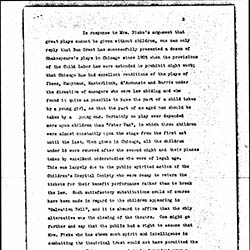 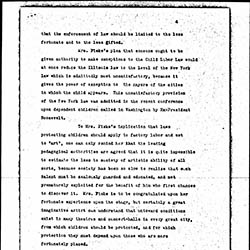 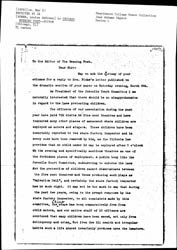 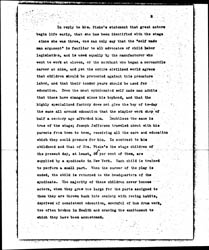 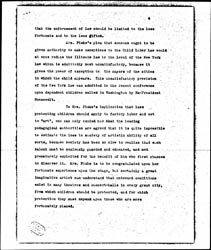 May we ask the courtesty of your columns for a reply to Mrs. Fiske's letter published in the dramatic section of your paper on Saturday evening, March 6th.

As President of the Juvenile Court Committee I am naturally interested that there should be no misapprehension in regard to the laws protecting children.

The officers of our association during the past year have paid 732 visits to five cent theaters and have inspected many other places of amusement where children are employed as actors and singers. These children have been invariably reported to the state factory inspector and in every case have been removed by him, as the Illinois law provides that no child under 16 may be employed after 7 o'clock in the evening and specifically mentions theaters as one of the forbidden places of employment. A public body like the Juvenile Court Committee, endeavoring to enforce the laws for the protection of children cannot discriminate between the five cent theaters and those producing such plays as "Salvation Nell", and certainly the state factory inspector has no such right. It may not be too much to say that during the past two years, owing to the prompt response by the state factory inspector, to all complaints made by this committee, the ↑Chicago↓ stage has been comparatively free from child actors, and our entire staff of 15 officers are convinced that many children have been saved, not only from delinquency and crime, but from the ill health and irregular habits such a life almost invariably produces upon the immature. [page 2]

In reply to Mrs. Fiske's statement that great actors begin life early, that she has been identified with the stage since she was three, one can only say that the "self made man argument" is familiar to all advocates of child labor legislation, and is used equally by the [manufacturer] who went to work at eleven, or the merchant who began a mercantile career at nine, and yet the entire civilized world agrees that children should be protected against this premature labor, and that their tender years should be used for education. Even the most opinionated self made man admits that times have changed since his boyhood, and that the highly specialized factory does not give the boy of [today] the same all around education that the simpler work shop of half a century ago afforded him. Doubtless the same is true of the stage; Joseph Jefferson traveled about with his parents from town to town, receiving all the care and education which they could procure for him. In contrast to his childhood and that of Mrs. Fiske's the stage children of the present day, at least 80 ↑85↓ per cent of them, are supplied by a syndicate in New York. Each child is trained to perform a small part. When the career of the play is ended, the child is returned to the headquarters of the syndicate. The majority of these children never become actors, when they grow too large for the parts assigned to them they are thrown back into society with roving habits, deprived of consistent education, scornful of [humdrum] work, too often broken in Health and craving the excitement to which they have been accustomed. [page 3]

In response to Mrs. Fiske's argument that great plays cannot be given without children, one can only  reply that Ben Greet has successfully presented a dozen of Shakespeare's plays in Chicago since 1905 when the provisions of the Child Labor Law were extended to prohibit night work; that Chicago  has had excellent renditions of the plays of Ibsen, [Hauptmann], Maeterlinck, d'Annunzio and Barrie under the direction of managers who were law abiding and who found it quite as possible to have the part of a child taken by a young girl, as that the part of an aged man should be taken by a young man. Certainly no play ever depended more upon children than "Peter Pan", in which three children were almost constantly upon the stage from the first act until the last. When given in Chicago, all the children under 16 were removed after the second night and their places taken by excellent understudies who were of legal age.This was largely due to the public spirited action of the Children's Hospital Society who were ready to return the tickets for their benefit performance rather than to break the law. Such satisfactory substitutions could of course have been made in regard to the children appearing in "Salvation Nell", and it is absurd to affirm that the only alternative was the closing of the theatre. One might go further and say that the public had a right to assume that Mrs. Fiske who has shown much spirit and intelligence in combatting the theatrical trust would not have permitted the success of her Chicago engagement to be dependent upon a violation of the Illinois law. Nor is it from such an artist as Mrs. Fiske that the community would expect the claim that law breaking is the privilege of the most respectable, and that the enforcement of law [page 4] should be limited to the less fortunate and to the less gifted.

Mrs. Fiske's plea that someone ought to be given authority to make exemptions to the Child Labor Law would at once reduce the Illinois law to the level of the New York law which is admittedly most unsatisfactory, because it gives the power of exception to the mayors of the cities in which the child appears. This unsatisfactory provision of the New York law was admitted in the recent conference upon depended children called in Washington by Ex-President Roosevelt.

To Mrs. Fiske's implication that laws protecting children should apply to factory labor and not to "art", one can only remind her that the leading pedagogical authorities are agreed that it is quite impossible to estimate the loss to society of artistic ability of all sorts, because society has been so slow to realize that such talent must be zealously guarded and educated, and not prematurely exploited for the benefit of him who first chances to discover it. Mrs. Fiske is to be congratulated upon her fortunate experience upon the stage, but certainly a great imaginative artist can understand that untoward conditions exist in many [theaters] and concert-halls in every great city, from which children should be protected, and for which protection they must depend upon those who are more fortunately placed. 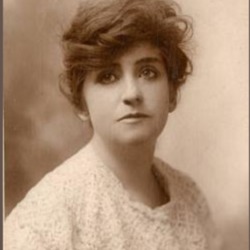 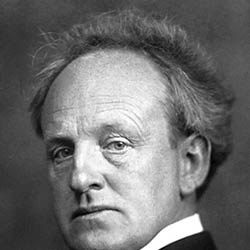