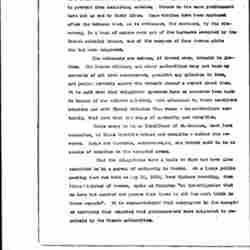 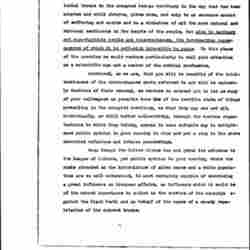 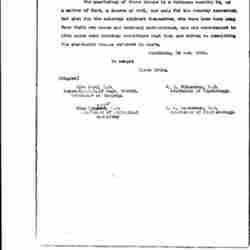 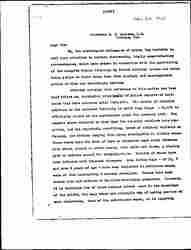 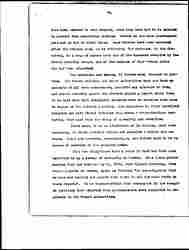 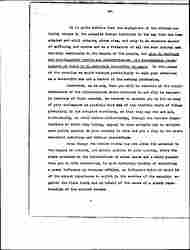 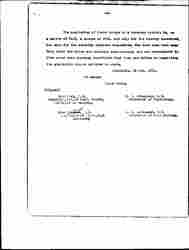 We, the undersigned colleagues of yours, beg herewith to call your attention to certain distressing, highly unsatisfactory circumstances, which have arisen in connection with the garrisoning of the occupied German territory by French colonial troops and which bring perils in their train that from sanitary and race-hygienic points of view are exceedingly serious.

Official material with reference to this matter has been laid before us, consisting principally of police reports of incidents that have occurred until Sept. 1920. The number of colonial soldiers in the occupied territory is still very large -- 40,000 is officially stated as the approximate total for November 1920. The reports above referred to show that the colonial soldiers have committed, and are repeatedly committing, deeds of criminal violence on females, the victims ranging from young schoolgirls to elderly woman. These deeds take the form of rape or attempted rape under [threats] with sword, pistol or other weapon, with cuffs and blows, a choking grip or seizure around the windpipe, [etc., etc.] Numbers of women have been infected with venereal diseases. Even little boys -- of 11, 7 and even 3 years of age -- have been subjected to nefarious usage, some of them contracting venereal contagion. Houses have been broken into and mothers of families criminally assaulted. Moreover, it is doubtless few of these heinous crimes come to the knowledge of the police, for many women are naturally shy of making mention of such [occurrences]. Some of the unfortunate women, it is reported, [page 2] have been reduced to such despair, that they have had to be watched to prevent them committing suicide. Others in the same predicament have put an end to their lives. Some victims have been murdered after the heinous deed, as is evidenced, for instance, by the discovery, in a heap of manure near one of the barracks occupied by the French colonial troops, one of the corpses of four German girls who had been debauched.

The criminals are seldom, if indeed ever, brought to justice. The French military and other authorities deny and hush up accounts of all such occurrences, prohibit any allusion to them, and punish severely anyone who spreads abroad a report about them. It is said even that eulogistic speeches have on occasion been made in [honor] of the colored soldiers, with allusions to their excellent behavior and with floral tributes from women -- demonstrations certainly, that must wear the stamp of unreality and deception.

There seems to be no likelihood of diminution, much less cessation, of these horrible crimes and assaults -- rather the reverse. Large new barracks, aerodromes, [etc.], are indeed said to be in course of erection in the occupied areas.

That the allegations have a basis in fact has been also testified to by a person of authority in Sweden. At a large public meeting that was held on May 10, 1920, Herr Hjalmar Branting, then Prime Minister of Sweden, spoke as follows: "An investigation that we have had carried out proves that there is all too much truth in these reports". It is characteristic that newspapers in the occupied territory that reported that pronouncement were subjected to reprisals by the French authorities. [page 3]

It is quite obvious that the employment of the African colonial troops in the occupied German territory in the way that has been adopted and still obtains, gives rise, not only to an enormous amount of suffering and sorrow and to a violation of all the most natural and rational sentiments in the hearts of the people, but also to sanitary and race-hygienic perils and inconveniences, the far-reaching consequences of which it is well-nigh impossible to gauge. To this phase of the question we would venture particularly to call your attention as a scientific man and a member of the medical profession.

Convinced, as we are, that you will be sensible of the intolerableness of the circumstances above referred to and will be earnestly desirous of their removal, we venture to entreat you let as many of your colleagues as possible know [illegible] of the terrible state of things prevailing in the occupied territory, so that they may one and all, individually, or still better collectively, through the various organizations to which they belong, appeal in some suitable way to enlightened public opinion in your country to rise and put a stop to the above described nefarious and inhuman proceedings.

Even though the United States has not given its adhesion to the League of Nations, yet public opinion in your country, where the risks attended on the intermixture of alien races and a white population are so well understood, is most certainly capable of exercising a great influence on European affairs, an influence which it would be of the utmost importance to enlist in the service of the campaign against the Black Peril and on behalf of the cause of a speedy repatriation of the colored troops. [page 4]

The quartering of those troops in a European country is, as a matter of fact, a source of evil, not only for the country concerned, but also for the colonial soldiers themselves, who have been torn away from their own homes and ordinary surroundings, and are constrained to live under such abnormal conditions that they are driven to committing the abominable crimes referred to above.

We remain
Yours [truly],