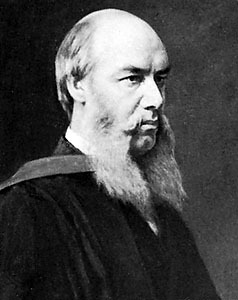 Edward Caird attended the University of Glasgow, though for only a short period because of his health, and then he attended Balliol College, Oxford, graduating in 1863. After graduating, Caird worked as Tutor at Merton College, Oxford, and then received the Professorship of Moral Philosophy at Glasgow, where he established political science as a field of study at the college. In 1893, Caird became Master of Balliol College, Oxford, and kept this position until 1907. In 1900 he was elected an Honorary Fellow of the Royal Society of Edinburgh, and in 1902 he was a founding fellow of the British Academy. He was also a corresponding member of the French Academy and had received honorary doctorates from the Universities of St. Andrews, Oxford, Cambridge, and Wales.

Picture from The Glasgow Story