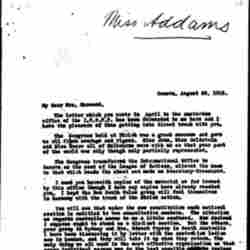 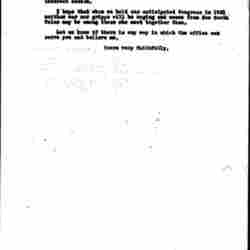 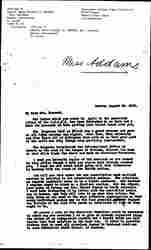 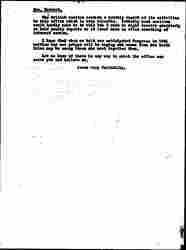 The letter which you wrote in April to the Amsterdam office of the I.C.W.P.P. has been forwarded to me here and I have the pleasure of thus getting into direct touch with you.

The Congress held at Zurich was a great success and gave us all fresh courage and [vigor]. Miss John, Miss Goldstein and Miss Moore all of Melbourne were with us so that your part of the world was ably though only partially represented.

The Congress transferred the International Office to Geneva as the seat of the League of Nations, altered the name to that which heads the sheet and made me Secretary-Treasurer.

I send you herewith copies of the material so far issued by this office though I dare say copies have already reached you. I hope the New South Wales group will feel themselves in harmony with the trend of the Zurich section.

You will see that under the new constitution each national section is entitled to two consultative members. The situation as regards Australia seems to me a little confused. New Zealand I suppose ought to stand as a distinct section. But the others, your group in Sydney and Mrs. Edward Fryers in South Australia I have been discussing it by letter with the Australian ladies now in London, and they will take it up when they return. The only thing we all want is the most effective organization so that every individual person may do the best possible [illegible] to replace the horrors of the last five years by conditions of life as they ought to be.

Of course a vote of the Executive Committee would be necessary to admit any new sections or to give an already organized group the status of an independent section but I hardly think you will decide that that solution is the best one. It would be possible without that to send all circulars issued to National Sections to each AUSTRALIAN STATE direct, if desired. [page 2]

The British section sends me a monthly report of its activities to this office which is very valuable. Probably most sections would hardly want to do this but I wish we might receive quarterly or half yearly reports or at least news as often something of interest occurs.

I hope that when we hold our anticipated Congress in 1921 neither war nor grippe will be raging and women from New South Wales may be among those who meet together then.

Let me know if there is any way in which the office can serve you and believe me, 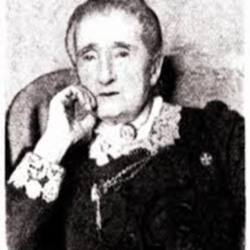 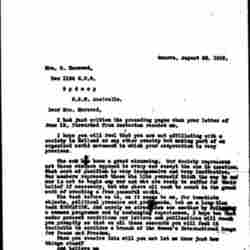 Balch replies to Harwood about the way in which the WILPF will organize within countries.

The enclosed materials were not found.