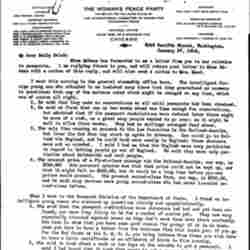 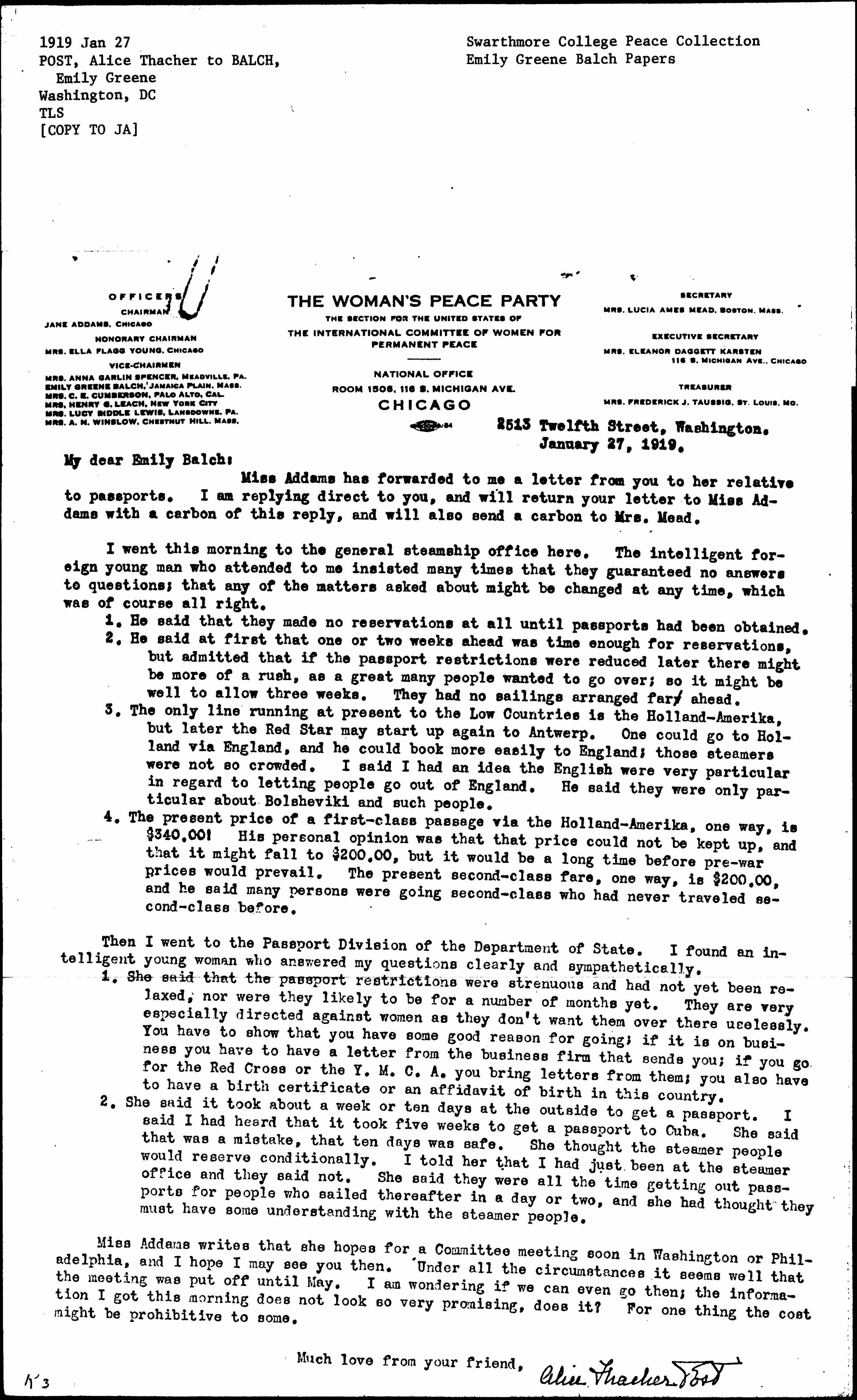 Miss Addams has forwarded to me a letter from you to her relative to passports. I am replying direct to you, and will return your letter to Miss Addams with a carbon of this reply, and will also send a carbon to Mrs. Mead.

I went this morning to the general steamship office here. The intelligent foreign young man who attended to me insisted many times that they guaranteed no answers to questions; that any of the matters asked about might be changed at any time, which was of course all right.

1. He said that they made no reservations at all until passports had been obtained.

2. He said at first that one or two weeks ahead was time enough for reservations, but admitted that if the passport restrictions were reduced later there might be more of a rush, as a great many people wanted to go over; so it might be well to allow three weeks. They had no sailings arranged far ahead.

3. The only line running at present to the Low Countries is the Holland-[America], but later the Red Star may start up again to Antwerp. One could go to Holland via England, and he could book more easily to England; those steamers were not so crowded. I said I had an idea the English were very particular in regard to letting people go out of England. He said they were only particular about Bolsheviki and such people.

4. The present price of a first-class passage via the Holland-[America], one way, is $340.00! His personal opinion was that that price could not be kept up, and that it might fall to $200.00, but it would be a long time before pre-war prices would prevail. The present second-class fare, one way, is $200.00, and he said many persons were going second-class who had never traveled second-class before.

Then I went to the Passport Division of the Department of State. I found an intelligent young woman who answered my questions clearly and sympathetically.

1. She said that the passport restrictions were strenuous and had not yet been relaxed, nor were they likely to be for a number of months yet. They are very especially directed against women as they don't want them over there uselessly. You have to show that you have some good reason for going; if it is on business you have to have a letter from the business firm that sends you; if you go for the Red Cross or the Y.M.C.A. you bring letters from them; you also have to have a birth certificate or an affidavit of birth in this country.

2. She said it took about a week or ten days at the outside to get a passport. I said I had heard that it took five weeks to get a passport to Cuba. She said that was a mistake, that ten days was safe. She thought the steamer people would reserve conditionally. I told her that I had just been at the steamer office and they said not. She said they were all the time getting out passports for people who sailed thereafter in a day or two, and she had thought they must have some understanding with the steamer people.

Miss Addams writes that she hopes for a Committee meeting soon in Washington or Philadelphia, and I hope I may see you then. Under all the circumstances it seems well that the meeting was put off until May. I am wondering if we can even go then; the information I got this morning does not look so very promising, does it? For one thing the cost might be prohibitive to some.

Much love from your friend,

Post tells Balch about the problems of obtaining passports to Europe.