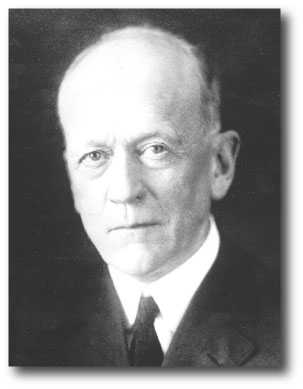 Charles Doolittle Walcott was a paleontologist and geologist. When he was eighteen he stopped attending high school and became a commercial fossil collector. Before 1872, he discovered what is now known as the Walcott-Rust Quarry. In 1876, Walcott began working as New York state paleontologist James Hall's assistant, and in 1879 he worked as a geological assistant for the U.S. Geological Survey. By 1894 he had become the director of the U.S. Geological Survey. He was also a member of the American Association for the Advancement of Science, elected to the National Academy of Sciences in 1896, and a founder of the Carnegie Institution of Washington. In 1907 he became the Secretary of the Smithsonian Institution, and in 1921 he served as president of the American Association for the Advancement of Science. In 1914, Walcott convened a conference in Washington, D.C. that promoted aeronautic science; this conference led to the creation of an Advisory Committee for Aeronautics, later the National Advisory Committee for Aeronautics. While Walcott was involved in these numerous organizations, he still studied fossils, returning repeatedly to the Burgess Shale in Canada.

Picture from Bureau of Reclamation