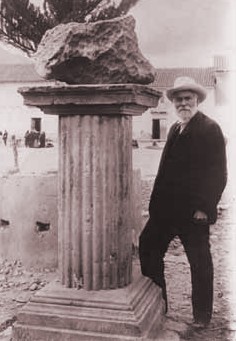 Henry Augustus Ward attended Williams College and the Lawrence Scientific School, Harvard. After college, Ward traveled to Egypt, Arabia, and Palestine, and studied at the Jardin des Plantes, the Sorbonne, and the School of Mines in Paris, and at the universities of Munich and Freiberg. When he returned to the United States he became a professor at the University of Rochester and founded Ward's Natural Science, which collected specimens from around the world to sell to colleges and museums.

Ward was married to Phoebe Howell, who died in 1891. They had three children together: Henry Levi, Charles Howell, and Alice Mabel. In 1897 he married Lydia Avery Coonley. Ward died in 1906 after being struck by an automobile.

Photo from Find A Grave