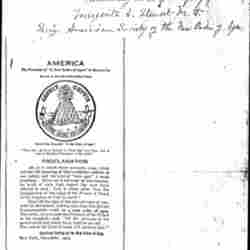 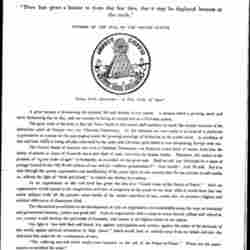 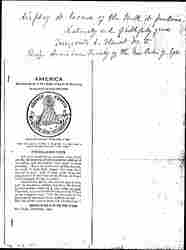 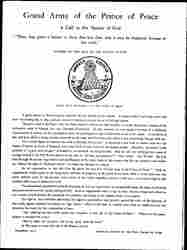 <display it because of the truth it proclaims. Fraternally and faithfully yours

Margarita A. Stewart M.D.
Secr'y, American Society of the New Order of Ages.>

The Promise of "A New Order of Ages" to Humanity

Reverse of the Seal of the United States

"Thou hast given a banner to them that love thee, that it may be displayed because of the truth."

All ye to whom these presents come, think out the full meaning of this wonderful emblem of our nation, and the kind of "new ages" it must prophesy. Since our Lord went up into heaven, no word of such high import has ever been uttered to men. Can it mean other than the inauguration of the reign of the Prince of Peace in his kingdom of God on earth?

Since all the ages of the past are ages of war, with its desolation, nothing less than this Divine Consummation could be a new order of ages. Therefore, we proclaim the Presence of the Prince in his kingdom -- and, "Of the increase of his government and peace there shall be no end … The zeal of the Lord of hosts will perform this."

American Society of the New Order of Ages.

Grand Army of the Prince of Peace

A Call to the Banner of God

"Thou hast given a banner to them that fear thee, that it may be displayed because of the truth."

REVERSE OF THE SEAL OF THE UNITED STATES

A great menace is threatening the spiritual life and destiny of our nation. A menace which is growing more and more threatening day by day, and our country is facing its crucial test as a Christian nation.

The great need of the hour is that the Peace Spirit in this nation shall mobilize to [repel] the sinister invasion of the militaristic spirit of Europe into our Christian Democracy. At this moment our own nation is in need of a defensive organization to combat on the [psychological] plane the growing [psychology] of militarism in the public mind. A condition of fear and hate which is being adroitly cultivated by the same anti-Christian spirit which is now devastating Europe with war.

The United States of America was born a Christian Democracy -- as distinctly a new kind of nation born into the family of nations as Jesus of Nazareth was a new kind of man born into the human family. Therefore, this nation is the promise of "a new order of ages" to humanity, as recorded on our great seal. Shall we sell our birthright for a mess of pottage brewed in the Old World caldron of war with its "military preparedness?" God forbid! And He will. But it is only through the speedy organization and mobilization of the peace Spirit in this country that He can prevent it and enable us, without the fight of "flesh and blood," to realize our destiny as a nation.

As an organization to this end God has given the idea of a "Grand Army of the Prince of Peace." Such an organization would appeal to the imagination and love of [pageantry] in the youth of our land, while it would draw into one active militant body all the genuine peace minds of the nation regardless of race, creed, sect, or previous religious and political differences of whatsoever kind.

The educational possibilities in the development of such an organization are incalculable along the ways of industrial and governmental honesty, justice and good-will. Such an organization with a corps in every church, college and school in our country would develop the patriotism of humanity, and loyalty to the highest ideals of our nation.

Our fight is "not with flesh and blood, but against principalities and powers, against the rulers of the darkness of this world, against spiritual wickedness in high places," which would lead us entirely away from our ideals and into the delusions that make for the continuation of wars.

"The suffering war-sick world awaits your response to the call of the Prince of Peace." Where are the peacemakers to mobilize his army?

"Not by might nor by power, but by my spirit, saith the Lord."

In His name we issue this call to the Banner of God.

AMERICAN SOCIETY OF THE NEW ORDER OF AGES.

American Society of the New Order of Ages

American Society of the New Order of Ages

A pamphlet urges citizens to create an active and militant peace movement to combat a menace to spiritual salvation.