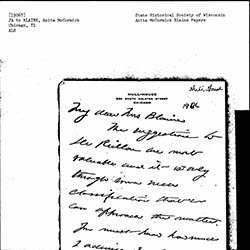 John Ridlon was a physician specializing in orthopedics, who served as a professor of orthopedic surgery at Northwestern University in Chicago from 1892-1908. He held teaching positions at the Chicago Post-Graduate School, the Northwestern Woman's Medical School, and the Rush Medical College. Ridlon enlisted in the U.S. Army Medical Corps at the age of 65, serving in the auxiliary reserves. He retired to Newport, RI, where he served as president of the Newport Medical Society and volunteered his services for school clinics. Ridlon died from a prolonged illness in 1936.