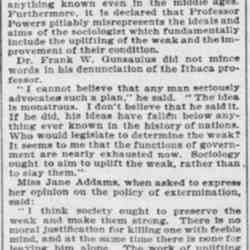 Chicago humanitarians and sociologists are strong in their denunciation of the plan of Professor H. H. Powers, professor of sociology in Cornell University, to exterminate the weak minded for the benefit of the strong. His idea is nothing less than barbaric, they declare, and the plan surpasses in cruelty anything known even in the middle ages. Furthermore, it is declared that Professor Powers pitiably misrepresents the ideals and aims of the sociologist which fundamentally include the uplifting of the weak and the improvement of their condition.

Dr. Frank W. Gunsaulus did not mince words in his denunciation of the Ithaca professor.

"I cannot believe that any man seriously advocates such a plan," he said. "The idea is monstrous. I don't believe that he said it. If he did, his ideas have fallen below anything ever known in the history of nations. Who would legislate to determine the weak? It seems to me that the functions of government are nearly exhausted now. Sociology ought to aim to uplift the weak, rather than to slay them."

Miss Jane Addams, when asked to express her opinion on the policy of extermination, said:

"I think society ought to preserve the weak and make them strong. There is no moral justification for killing one with feeble mind, and at the same time there is none for leaving him alone. The work of uplifting the weak must be carried on tirelessly and with increased vigor if anything substantial is to be accomplished. The method suggested by Professor Powers is entirely unjustifiable. Humane instinct is so highly developed that it would be impossible to execute such a plan."

"The plan is so wholly antagonistic to the ideas of Christianity and humanity that it scarcely ought to be discussed. The aid extended to the weak is multiplied as civilization advances and we know better the duties man owes to man." 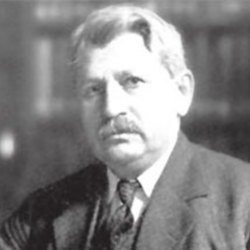 Addams, Thomas, and Gunsaulus decry the proposal of H. H. Powers to exterminate the feeble-minded for the benefit of the strong.