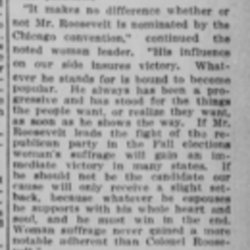 Noted Woman Leader Holds That If Colonel Is Nominated Votes for Women Will Prevail in Many States. -- Helps Kansans.

Chicago. June 13. -- "Suffrage is won," said Miss Jane Addams of Hull House, when informed that Theodore Roosevelt favors the incorporation of a woman suffrage plank in the republican platform.

"It makes no difference whether or not Mr. Roosevelt is nominated by the Chicago convention," continued the noted woman leader. "His influence on our side insures victory. Whatever he stands for is bound to become popular. He always has been a progressive and has stood for the things the people want, or realize they want, as soon as he shows the way. If Mr. Roosevelt leads the fight of the republican party in the Fall elections woman's suffrage will gain an immediate victory in many states. If he should not be the candidate our cause will only receive a slight setback, because whatever he espouses he supports with his whole heart and soul, and he must win in the end. Woman suffrage never gained a more notable adherent than Colonel Roosevelt."

Miss Addams will present the following appeal to the republican platform committee, asking that a suffrage plank be incorporated in the national platform:

"We, the women of Illinois, who have stood side by side with the republicans and who have helped them in the opening of the wilderness, request that the members of the republican convention include in their platform the enfranchisement of women.

"We have worked for suffrage in the United States for over sixty years and in Illinois for fifty years. We have seen you welcome to our ranks the negro and all sorts of foreigners. The time has now come when we demand the rights of women. We are equal and sometimes the superior of any of the classes you have enfranchised; we pay taxes and, in many instances, women lead the list.

"We can bring to your party a higher degree of intelligence and morality than some of the men you have enfranchised, and it is our earnest desire that you [endorse] the enfranchisement of the women of the United States." 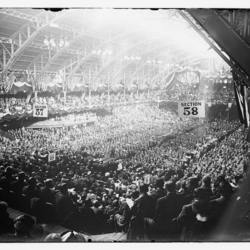 Addams discusses the impact of the Republican convention on the woman suffrage movement and presents her appeal to the platform committee. On June 19, she addressed the Party's platform committee, and her remarks are included here.