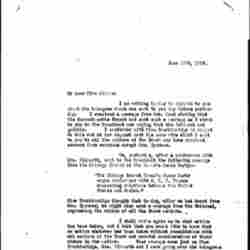 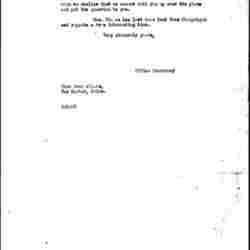 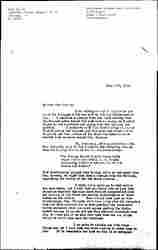 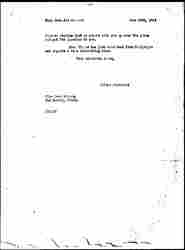 I am writing [today] to explain to you about the telegram which was sent to you day before yesterday. I received a message from Mrs. Mead stating that the Massachusetts Branch had sent such a message as I wired to you to the President and urging that the National act quickly. I conferred with Miss Breckinridge in regard to this and at her request sent the same wire which I sent to you to all the members of the Board and have received answers from everyone except Mrs. Spencer.

We, yesterday, after a conference with Mrs. Wilmarth, sent to the President the following message from the Chicago Branch of the Woman's Peace Party: --

"The Chicago Branch Woman's Peace Party urges conference with A. B. C. Powers concerning relations between the United States and Mexico."

Miss Breckinridge thought that [today], after we had heard from Mrs. Spencer, we might also send a message from the National, expressing the wishes of all the Board members.

I shall write again as to what action has been taken, but I felt that you would like to know that no action whatever had been taken without consultation with all members of the Board and careful consideration of their wishes in the matter. Your message came just as Miss Breckinridge, Mrs. Wilmarth and I were going over the telegrams that had been received and we were particularly interested in the statement that you would oppose quoting the Mobile speech because if we had not had this definite statement from you, we would all of us have felt that that was one of the things we could urge upon the President.

I am sorry to trouble you with these things and yet I know that you would wish me to refer them to you. It is remarkable how lost we feel in an emergency [page 2] when we realize we cannot call you up over the phone and put the question to you.

Mrs. Thomas has just come back from [Champaign] and reports a very interesting time.

Karsten explains to Addams how the telegram was sent to Woodrow Wilson, and seeks her guidance.