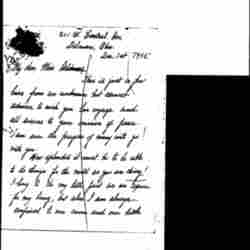 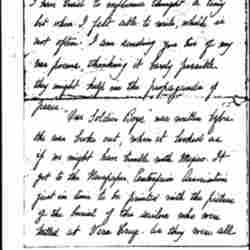 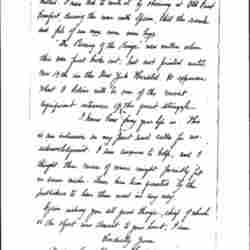 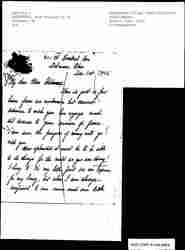 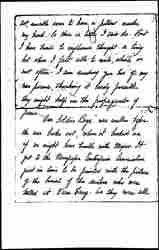 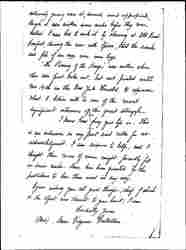 This is just a few lines from an unknown but earnest admirer to wish you bon voyage and all success to your mission of peace. I am sure the prayers of many will go with you.

How splendid it must be to be able to do things for the world as you are doing! I long to do my little part as an excuse for my being, but alas I am always confined to one room and one little [page 2] cot, unable even to have a pillow under my head. So there is little I can do. But I have tried to influence thought a tiny bit when I felt able to write, which is not often. I am sending you two of my war poems, thinking it barely possible they might help in the propaganda of peace.

"Our Soldier Boys” was written before the war broke out, when it looked as if we might have trouble with Mexico. It got to the Newspaper Enterprise Association just in time to be printed with the picture of the burial of the sailors who were killed at Vera Cruz. As they were all [page 3] extremely young men it seemed most appropriate, though it was written some weeks before they were killed. I was led to write it by observing at Old Point Comfort, during the war with Spain, that the rank and file of our men were mere boys.

“The Passing of the Kings” was written when this war first broke out, but not printed until Nov 14th in the New York Herald. It expresses what I believe will be one of the most significant outcomes of the great struggle.

I know how busy your life is. This is an intrusion on my part and calls for no acknowledgement. I am anxious to help; and I thought these verses of mine might possibly fit in some niche. Leave has been granted by the publishers to have them used in any way.

Again wishing you all good things, chief of which is the object now clearest to your heart, I am 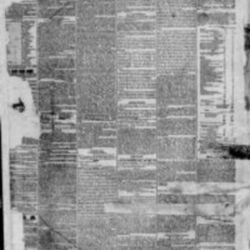 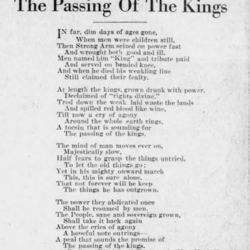 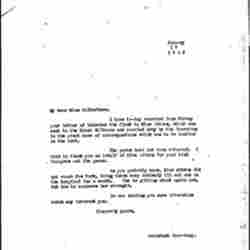 Culbertson sends Addams good luck on her peace mission and praises her ability to do such important things.

The actual enclosures were not found, but published versions have been found.