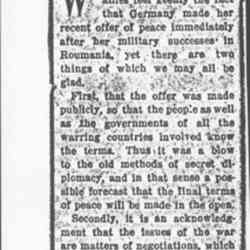 While we realize that the allies feel keenly the fact that Germany made her recent offer of peace immediately after her military successes in [Romania], yet there are two things of which we may all be glad.

First, that the offer was made publicly, so that the people as well as the governments of all the warring countries involved know the terms. Thus it was a blow to the old methods of secret diplomacy, and in that sense a possible forecast that the final terms of peace will be made in the open.

Secondly, it is an acknowledgment that the issues of the war are matters of negotiations, which must in the end supersede military methods. We could wish that the allies had been willing to begin the process of negotiation on the very first offer, however distasteful it might have been to them in certain features. To begin a pourparler does not mean that the terms are of necessity acceptable. 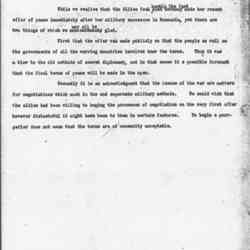