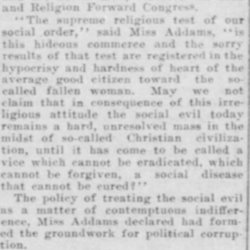 NEW YORK, April [23]. -- Society's attitude toward the social evil was advanced as the supreme test of Christian religion by Jane Addams, the Hull House philanthropist, in a speech in Carnegie Hall today on "The Church and the Social Evil," before the Men and Religion Forward Congress.

"The supreme religious test of our social order," said Miss Addams, "is this hideous commerce and the sorry results of that test are registered in the hypocrisy and hardness of heart of the average good citizen toward the so-called fallen woman. May we not claim that in consequence of this irreligious attitude the social evil today remains a hard, unresolved mass in the midst of so-called Christian civilization, until it has come to be called a vice which cannot be eradicated, which cannot be forgiven, a social disease that cannot be cured?"

The policy of treating the social evil as a matter of contemptuous indifference, Miss Addams declared had formed the groundwork for political corruption.

"This commerce, protected by a thick hedge of secrecy," she continued, "imperceptibly renewing itself through changing administrations, is the one point of maladministration, the unbreakable bank to which the corrupt politician may repair when in need of funds. The corruption spreads until the disorderly house, the saloon and the gambling den are the trio literally at the base of the real administration of our cities." 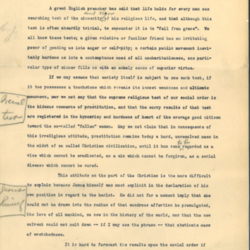 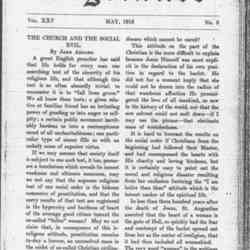 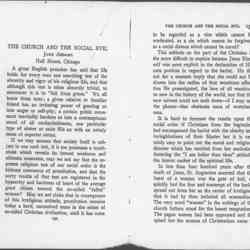 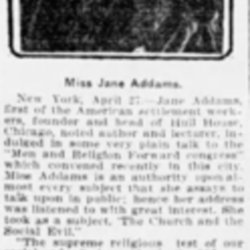 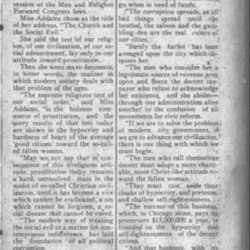 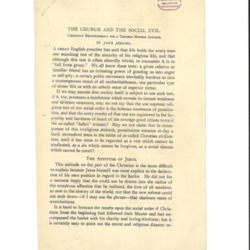 A newspaper report of Addams' April 23 speech at Carnegie Hall entitled "The Church and the Social Evil," published on May 13.