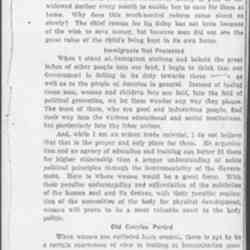 At the National Suffrage Convention, Jane Addams spoke on "The Communion of the Ballot." She said, in part:

Women desire to come out into that larger life which knows no class, no sex, but where all subjects are discussed upon their merits. An altruism which sets limits, in and of itself constitutes a kind of danger to the community. In the past there grew up a belief that unless a woman gave her whole time and strength to her family, she was neglecting her duty. This is often true, but it is often the case also that a woman can give part of her time to work for the general good. When she limits her whole attention and interest to her family, it leads to a narrowing of her mind and of her sense of morality.

Thoughtful men and women are awakening to the need of mothers' pensions, or funds for parents. Instead of placing out destitute children, a certain amount of money is paid to the widowed mother every month to enable her to care for them at home. Why does this much-needed reform come about so slowly? The chief reason for its delay has not been because of the wish to save money, but because men did not see the greaet value of the child's being kept in its own home.

When I stand at immigrant stations and behold the great influx of other people into our land, I begin to think that our Government is failing in its duty towards these people as well as to the people of America in general. Instead of taking these men, women and children into our fold, into the fold of political protection, we let them wander any way they please. The most of them, who are good and industrious people, find their way into the various educational and social institutions, but particularly into the labor unions.

And, while I am an ardent trade unionist, I do not believe that that is the proper and only place for them. No organization and no agency of education and training can better fit them for higher citizenship than a proper understanding of noble political principles through the instrumentality of the Govenrment. Here is where women would be a great force. With their peculiar understanding and appreciation of the subtleties of the human soul and its desires, with their peculiar realization of the necessities of the body for physical development, women will prove to be a most valuable asset to the body politic.

When women are excluded from council, there is apt to be a certain coarseness of view in looking at humanitarian questions. I remember in Chicago when old people were sent to the poorhouse, husbands and wives after living together for 40 years were parted; and when women went up year after year to protest against this cruelty, we were told that it was necessary, because the buildings were built that way. We need to bring to bear the whole community's power of comprehension upon questions of social concern.

Take recreation, which the government is so fast taking up. Shall we say that the providing and supervision of public recreation will be well done by men only---men who have been so long annoyed by young people's sports when they came home tired at night? Unless women have a share in planning out the recreation, there is danger that some important points will he neglected. 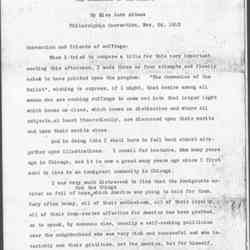 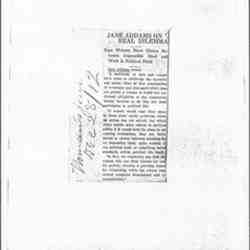 An excerpt from Addams' November 24 speech to the National Woman Suffrage Association meeting highlights her ideas about mother's pensions, immigrant socialization, and recreation.