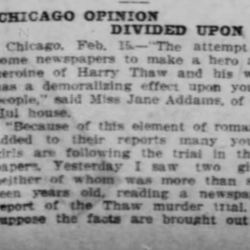 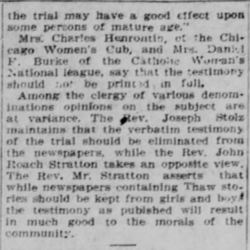 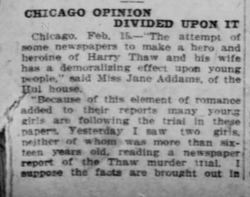 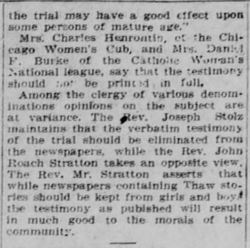 CHICAGO OPINION DIVIDED UPON IT

Chicago, Feb 15. -- "The attempt of some newspapers to make hero and heroine of Hary Thaw and his wife has had a demoralizing effect upon young people," said Miss Jane Addams of [Hull] house.

"Because of this element of romance added to their reports many young girls are following the trial in these papers. Yesterday I saw two girls, neither of whom was more than sixteen years old, reading a newspaper report of the Thaw murder trial. I suppose the facts are brought out in [page 2] the trial may have a good effect upon some persons of mature age."

Mrs. Charles Henrontin, of the Chicago Women's Club, and Mrs. Daniel F. Burke of the Catholic Woman's National league, say that testimony should not be printed in full.

Among the clergy of various denominations opinions on the subjects are at variance. The Rev. Joseph Stolz maintains that the verbatim testimony of the trial should be eliminated from the newspaper, while the Rev. John Roach Stratton takes an opposite view. The Rev. Mr. Stratton asserts that while newspapers containing Thaw stories should be kept from girls and boys the testimony as published will result in much good to the morals of the community. 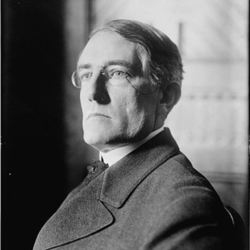 Addams chastises newspapers for glamorizing the story of Harry Thaw, an heir to a railroad fortune who killed his wife's lover.