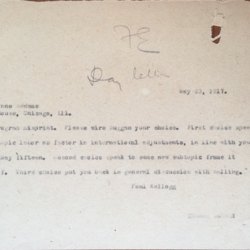 Anna Strunsky Walling was an author and civil rights activist. Walling was one of the founding members of the NAACP and was heavily involved in social activism for her entire adult life. She worked as a journalist, reporting various stories such as the 1905 Russian Revolution. Strunsky died in 1963.

Strunsky married William English Walling in 1906. They had four children together. Walling later filled divorced in 1932.