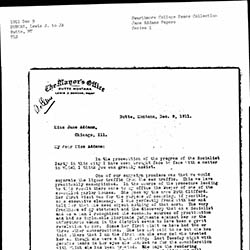 Lewis J. Duncan was a lawyer, but after two years quit his practice to be a railroad worker, and then moving on to become a bookkeeper. He then became the first Unitarian minister in the town of Butte, Montana. As a minister, he wrote "Modern Individualism," which appeared in The Arena in 1908. Politically, Duncan was a socialist, and in 1911 and 1913 he was elected mayor of Butte. As mayor, Butte's sanitation and public health improved greatly, with deaths from contagious diseases dropping by 84 percent, and deaths of children younger than 12 dropping by 50 percent. However, in 1914 he was impeached for neglecting his duties during the Miners Union Hall bombing in June of that year. Duncan was considered "the best Mayor [Butte] ever had," and many believed he was purposefully ousted by his political opponents. Also in 1914, Duncan was attacked in his office, being stabbed three times by Erik Lantala, who Duncan shot and killed in self-defense.

Duncan married Kate T. Keath in 1882. They had two children together. Duncan died in 1936.