Address at the Civic Dedication of the Abraham Lincoln Centre, June 1, 1905 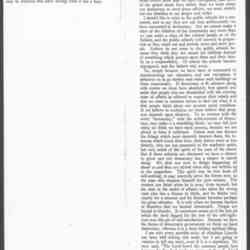 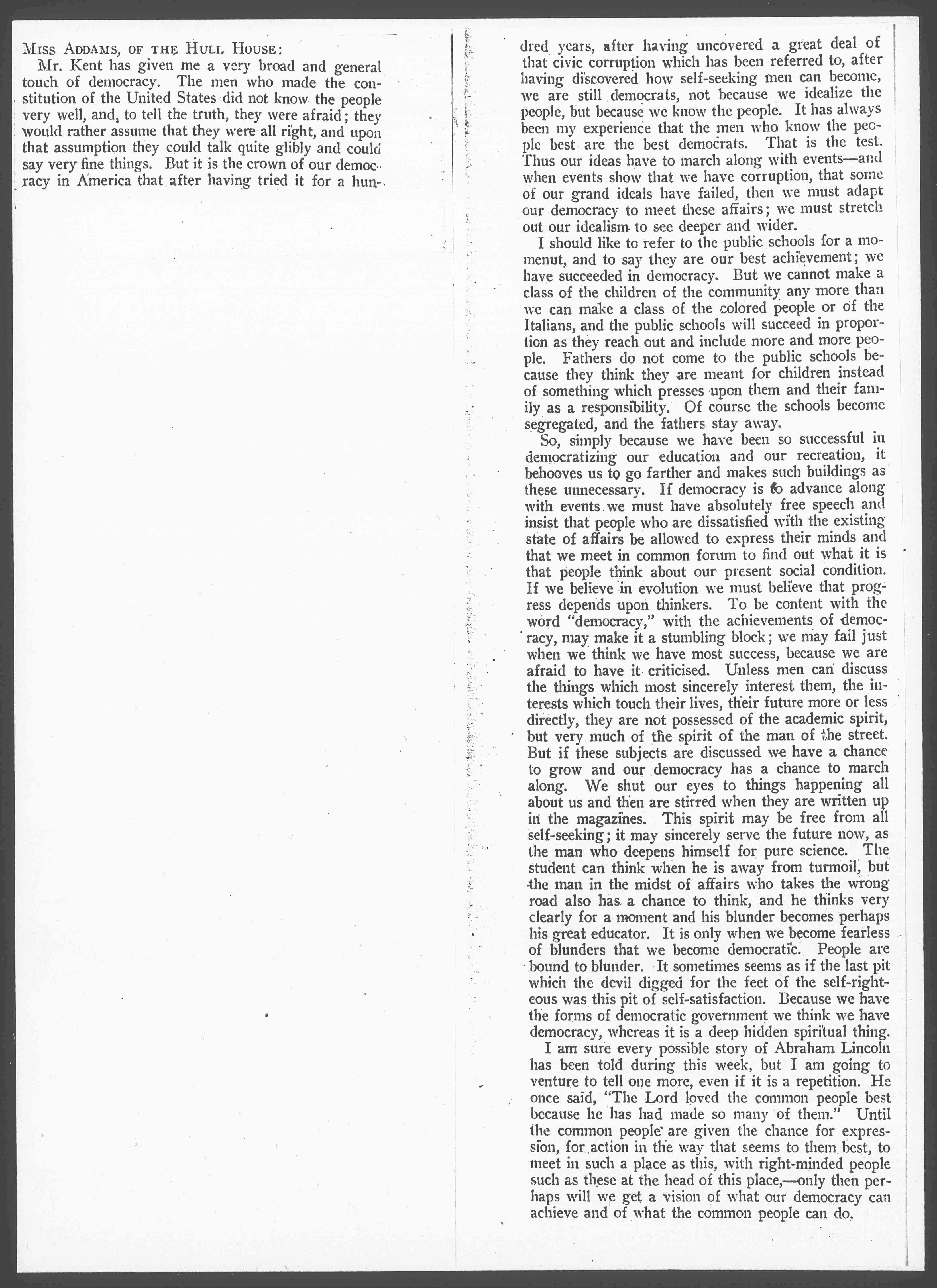 MISS ADDAMS, OF THE HULL HOUSE:

Mr. Kent has given me a very broad and general touch of democracy. The men who made the constitution of the United States did not know the people very well, and, to tell the truth, they were afraid; they would rather assume that they were all right, and upon that assumption they could talk quite glibly and could say very fine things. But it is the crown of our democracy in America that after having tried it for a hundred years, after having uncovered a great deal of that civic corruption which has been referred to, after having discovered how self-seeking men can become, we are still democrats, not because we idealize the people, but because we know the people. It has always been my experience that the men who know the people best are the best democrats. That is the test. Thus our ideas have to march along with events -- and when events show that we have corruption, that some of our grand ideals have failed, then we must adapt our democracy to meet these affairs; we must stretch out our idealism to see deeper and wider.

I should like to refer to the public schools for a moment, and to say they are our best achievement; we have succeeded in democracy. But we cannot make a class of the children of the community any more than we can make a class of the colored people or of the Italians, and the public schools will succeed in proportion as they reach out and include more and more people. Fathers do not come to the public schools because they think they are meant for children instead of something which presses upon them and their family as a responsibility. Of course the schools become segregated, and the fathers stay away.

So, simply because we have been so successful in democratizing our education and our recreation, it behooves us to go farther and makes such buildings as these unnecessary. If democracy is to advance along with events we must have absolutely free speech and insist that people who are dissatisfied with the existing state of affairs be allowed to express their minds and that we meet in common forum to find out what it is that people think about our present social condition. If we believe in evolution we must believe that progress depends upon thinkers. To be content with the word "democracy," with the achievements of democracy, may make it a stumbling block; we may fail just when we think we have most success, because we are afraid to have it [criticized]. Unless men can discuss the things which most sincerely interest them, the interests which touch their lives, their future more or less directly, they are not possessed of the academic spirit, but very much of the spirit of the man of the street. But if these subjects are discussed we have a chance to grow and our democracy has a chance to march along. We shut our eyes to things happening all about us and then are stirred when they are written up in the magazines. This spirit may be free from all self-seeking; it may sincerely serve the future now, as the man who deepens himself for pure science. The student can think when he is away from turmoil, but the man in the midst of affairs who takes the wrong road also has a chance to think, and he thinks very clearly for a moment and his blunder becomes perhaps his great educator. It is only when we become fearless of blunders that we become democratic. People are bound to blunder. It sometimes seems as if the last pit which the devil digged for the feet of the self-righteous was this pit of self-satisfaction. Because we have the forms of democratic government we think we have democracy, whereas it is a deep hidden spiritual thing.

I am sure every possible story of Abraham Lincoln has been told during this week, but I am going to venture to tell one more, even if it is a repetition. He once said, "The Lord loved the common people best because he has had made so many of them." Until the common people are given the chance for expression, for action in the way that seems to them best, to meet in such a place as this, with right-minded people such as these at the head of this place, -- only then perhaps will we get a vision of what our democracy can achieve and of what the common people can do.

Addams discusses the role of public education in fostering democracy. The speech was given during the closing session of the General Congress of Religions, on June 1, and published on July 27.