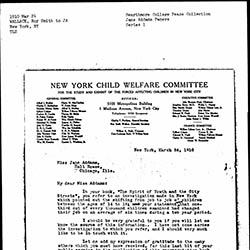 Roy Smith Wallace was a noted sociologist who focused his work primarily on child welfare and settlement houses. He was a student at Harvard University where he was the secretary of The Phillips Brooks House, a charity clubhouse in Cambridge. In 1905, he moved to Buffalo, New York to take the superintendent position at a settlement house there, Welcome Hall. In 1908, he relocated to the nearby Watson House Social Settlement to be the director. While a resident of the city, he served as the secretary of the Buffalo Playgrounds Association. He then left in 1909 to join a committee that planned to undertake the longest, most in-depth study of child sociology ever done. Beginning in 1918, Wallace started working for the National Recreation Association, first as the director of the Field Department and then as special representative. During wartime, he was a representative for the War Camp Community Service, which provided recreational services and centers for soldiers. He was a part of the National Conference of Child Labor, National Conference of Social Work, Hoover White House Conference on Child Health and Protection, and the Conference of Charities. Wallace was the secretary for the Charity Organization Society, and the Society to Protect Children from Cruelty.

Wallace married Grace Sutton in 1912. They had two children Wallace died in 1935.