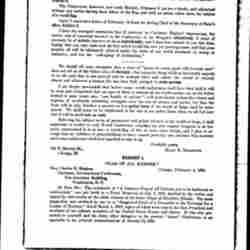 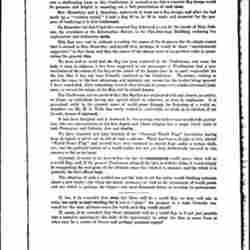 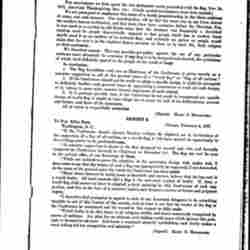 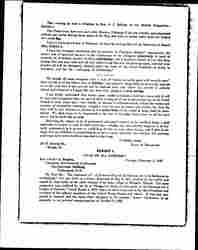 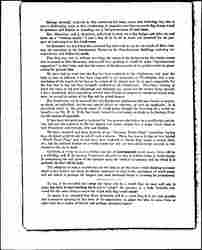 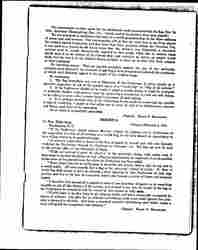 “FLAG OF ALL NATIONS.”

My Dear Sir: The sentiment of “A Common Flag of All Nations, yet to be fashioned or emblemized,” was put forth in a Peace Memorial of July 4, 1915, drafted by the writer and signed by nine-tenths of the adult citizens of his home village of Hinsdale, Illinois. The same suggestion was outlined by me in a “Suggested Draft of a Preamble to the Covenant for a League of Nations,” dated March 1, 1919, copies of which were sent to the then President and members of his cabinet, members of the United States Senate and others. It was also presented to yourself and the three other delegates to the present “Arms” Conference in an appendix to my printed communication of October 22, 1921. [page 2]

Having devoutly believed in this sentiment for many years, and believing, too, that it was a challenging issue to this Conference, it seemed to me that a concrete flag design would be germane and helpful in rounding out a full presentation of such issue.

Mrs. Mecartney and I, therefore, undertook to work out a flag design, and after she had made up a “working model,” I had a flag 40 in. by 60 in. made and mounted for the purpose of tendering it to this Conference.

On December 1st last I had this mounted flag delivered to you by the hands of Miss Jackson, the attendant at the Information Bureau in the Pan-American Building, enclosing two explanatory and dedicatory cards.

This flag was sent in without revealing the names of the designers for the simple reason that it seemed to Mrs. Mecartney and myself that, perhaps, it would be more “spontaneously suggestive” in that form, and that the names of the donors were of no positive value in prosecuting the general idea.

We have had no word that the flag has been tendered to the Conference, and since the body is soon to adjourn, it has been suggested to my messenger at Washington that a non-revelation of the source of the flag or the names of its donors may be in part responsible for the fact that it has not been formally tendered to the Conference. Therefore, wishing to serve the cause to the best advantage and minimize any reason for the tender being ignored, I have concluded, after consulting several close friends of progressive minds and sound judgment, to reveal the origin of the flag and its actual donors.

The Conference can be assured that this flag has not originated with any church, or society, or clique, or individual, having any special object to subserve, or even to emphasize. It is presented solely in the general cause of world peace through the fostering of a world nationality -- as Mr. H. G. Wells has lately termed it -- and which, we think, is its likeliest, if not its sole, means of approach.

It has been designed and is tendered by two persons who believe in a world-wide patriotism, who are non-sectarian to the last degree and whose religion has a scope which takes in both Protestant and Catholic, Jew and Gentile.

We have inquired and have learned of no “National World Flag” heretofore having been designed or given out in aid of such a scheme. There has been a design or two, labeled “World Peace Flag” and several have been tendered as church flags under a certain faith, etc.; but the political feature of a world nation has not yet been deliberately covered in this manner so far as we know.

Certainly, it seems to us, long before the day of consummated world peace, there will be a world flag; and, if the present Conference adopted the idea in definite form, it would simply be recognizing the real germ of the ultimate cause for which it is sponsor, and for which it is probably the first official body.

The adoption of such a symbol can not but help to set the entire world thinking seriously about a new fealty -- the thing absolutely necessary or vital to the attainment of world peace, and one which is perhaps the biggest and most dominant factor in insuring its permanency.

If, too, it be conceded that some day there will be a world flag, we may well ask, is today too early to start working for it and to “plant” the purpose in a body formally convened for the same ultimate cause for which such flag would stand?

If, again, it be conceded that there ultimately will be a world flag, is it not just possible that a complete ignoring by this body of the opportunity to adopt the idea in some form or other may be a source of future and perhaps poignant regret? [page 3]

We are prompted to emphasize this claim of a world proprietorship in the three emblems of cross, star and crescent. Our encyclopedias tell us that the cross was in use from almost the earliest human civilization, and that more than three centuries before the Christian Era, it was used as a symbol on old Greek coins; that the crescent was frequently a cherished emblem used by people diametrically opposed to that people which has in modern times chiefly used it as an emblem of its national flag; and certainly no nation or people would claim that the star is in the slightest degree peculiar to them or to their life, their religion or their sentiment.

We therefore repeat: That any possible prejudice against the use of any particular emblems must ultimately be overcome if any flag is to be designed and adopted, the symbolism of which shall definitely appeal to the people of the world at large.

1. The flag heretofore sent you as Chairman of the Conference is given merely as a concrete suggestion in aid of the general cause of a “world flag” or “flag of all nations.”

2. If the Conference should not be ready to adopt a specific design, it might be prompted to definitely further such general cause by appointing a commission to work out such design, or by taking in some other manner formal cognizance of such subject.

It is perhaps possible that, if the Conference be not ready to recommend any specific design of world flag, it might at least adopt one to grace the hall of its deliberations, present and future, and those of its successors.

All of which is respectfully submitted. 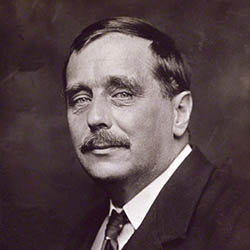 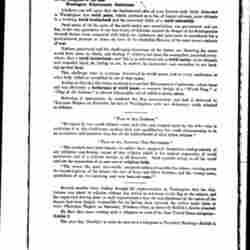 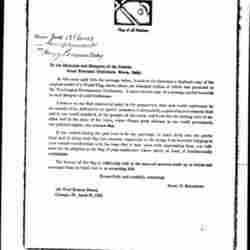 Mecartney asks Hughes to support the Flag or All Nations for use at international meetings.

This record describes the document marked "Exhibit 1," beginning at the bottom of page 1 and ending in the middle of page 3.