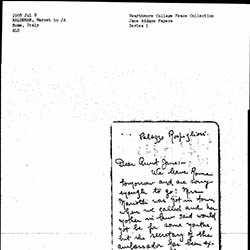 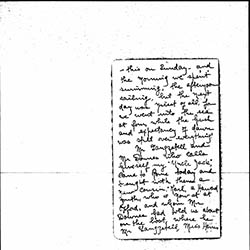 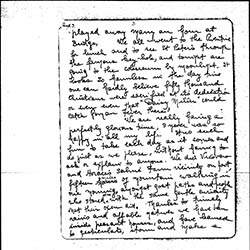 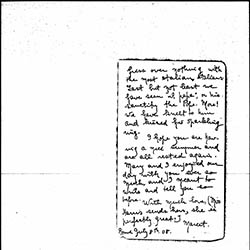 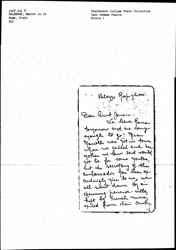 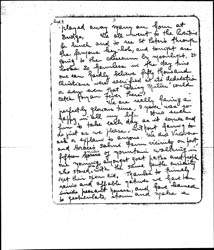 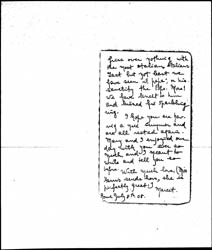 We leave Rome tomorrow and are sorry enough to go! Mrs Mariotti was not in town when we called and her mother in law said would not be for some months, but the secretary of the ambassador has been exceedingly nice to us, we all went down to a charming pension-villa, kept by French nuns, exiled from their country. [page 2]-- this on Sunday -- and the morning we spent swimming, the afternoon sailing, but the next day was nicest of all, for we went into the sea at four, while the hush and expectancy of dawn was still over everything!

Mr Langzetell and Mr Downes who calls himself my "Uncle Jack," came to Rome today and brought with them a new cousin, "Karl", a Harvard youth, who is now at at Oxford, and whom Mr Downes had told us about on the boat, where he, Mr Langzetell, Miss Harris [page 3] ↑and I,↓ played away many an hour at Budge. We all went to the Aventine for lunch and to see St Peter's through the famous key-hole, and tonight are going to the [coliseum] by moonlight. It looks so harmless in the day time one can hardly believe fifty thousand Christians were sacrificed at its dedication or even that "Daisy Miller" could catch Roman Fever there!

We are really having a perfectly glorious time, I never was so happy in all my life. It is such fun to take each day as it comes and do just as we please, without having to ask or explain to anyone. We did Vicovaro and Horace's Sabine Farm vicinity on foot, fifteen hours ↑miles↓ of mountain walking in one morning, amongst goat paths and people who stared ↑at us↓ with the same gentle curiosity that their oxen did. Thanks to timely rains and affable natives we have been inside peasant houses, and have learned to gesticulate, storm and make a [page 4] fuss over nothing with the most Italian Italians. Last but not least we have seen "it  papa," or his sanctity the Pope. More! We have knelt to him and kissed his sparkling ring.

I hope you are having a nice summer and are all rested again. Mary and I enjoyed our day with you ever so much, and I meant to write and tell you so before.

With much love, (Miss Harris sends hers, she is perfectly great!) 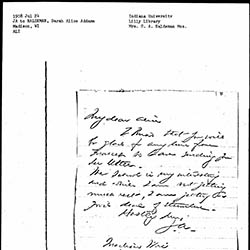 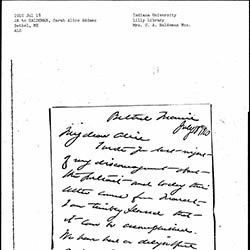 Haldeman writes Addams about her travels in Italy.