The True Ideal of a Public School System That Aims to Benefit All, January 25, 1908 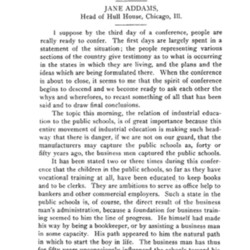 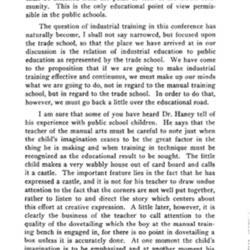 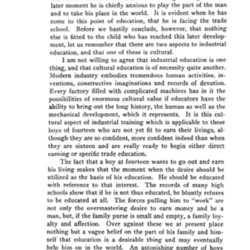 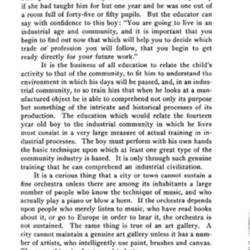 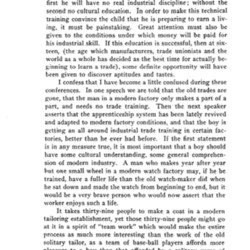 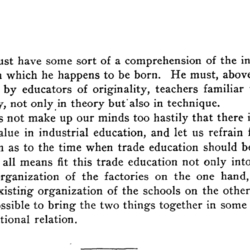 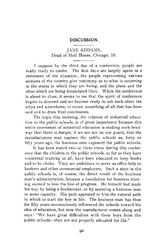 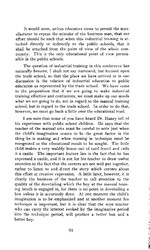 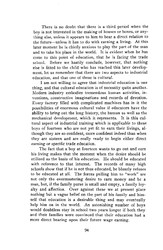 I suppose by the third day of a conference, people are really ready to confer. The first days are largely spent in a statement of the situation; the people representing various sections of the country give testimony as to what is occurring in the states in which they are living, and the plans and the ideas which are being formulated there. When the conference is about to close, it seems to me that the spirit of conference begins to descend and we become ready to ask each other the whys and wherefores, to recast something of all that has been said and to draw final conclusions.

It has been stated two or three times during this conference that the children in the public schools, so far as they have vocational training at all, have been educated to keep books and to be clerks. They are ambitious to serve as office help to bankers and other commercial employers. Such a state in the public schools is, of course, the direct result of the business man's administration, because a foundation for business training seemed to him the line of progress. He himself had made his way by being a bookkeeper, or by assisting a business man in some capacity. His path appeared to him the natural path in which to start the boy in life. The business man has thus for fifty years unconsciously influenced the schools toward his idea of education, but now the manufacturer comes along and says: "We have great difficulties with these boys from the public schools -- they are not properly educated for life." [page 2]

It would seem, unless educators mean to permit the manufacturer to repeat the mistake of the business man, that our effort should be such that when this industrial training is attached directly or indirectly to the public schools, that it shall be attached from the point of view of the whole community. This is the only educational point of view permissible in the public schools.

I am sure that some of you have heard Dr. Haney tell of his experience with public school children. He says that the teacher of the manual arts must be careful to note just when the child's imagination ceases to be the great factor in the thing he is making and when training in technique must be recognized as the educational result to be sought. The little child makes a very wabbly house out of card board and calls it a castle. The important feature lies in the fact that he has expressed a castle, and it is not for his teacher to draw undue attention to the fact that the corners are not well put together, rather to listen to and direct the story which centers about this effort at creative expression. A little later, however, it is clearly the business of the teacher to call attention to the quality of the dovetailing which the boy at the manual training bench is engaged in, for there is no point in dovetailing a box unless it is accurately done. At one moment the child's imagination is to be emphasized and at another moment his technique is important, but it is clear that the wise teacher who can carry the interest evoked by the imaginative period into the technique period, will produce a better box and a better boy. [page 3]

There is no doubt that there is a third period when the boy is not interested in the making of houses or boxes, or anything else, unless it appears to him to bear a direct relation to the future --  unless it has to do with earning a living. At this later moment he is chiefly anxious to play the part of the man and to take his place in the world. It is evident when he has come to this point of education, that he is facing the trade school. Before we hastily conclude, however, that nothing else is fitted to the child who has reached this later development, let us remember that there are two aspects to industrial education, and that one of these is cultural.

I am not willing to agree that industrial education is one thing, and that cultural education is of necessity quite another. Modern industry embodies tremendous human activities, inventions, constructive imaginations and records of devotion. Every factory filled with complicated machines has in it the possibilities of enormous cultural value if educators have the ability to bring out the long history, the human as well as the mechanical development, which it represents. It is this cultural aspect of industrial training which is applicable to these boys of fourteen who are not yet fit to earn their livings, although they are so confident, more confident indeed than when they are sixteen and are really ready to begin either direct earning or specific trade education.

The fact that a boy at fourteen wants to go out and earn his living makes that the moment when the desire should be utilized as the basis of his education. He should be educated with reference to that interest. The records of many high schools show that if he is not thus educated, he bluntly refuses to be educated at all. The forces pulling him to "work" are not only the overmastering desire to earn money and be a man, but, if the family purse is small and empty, a family loyalty and affection. Over against these we at present place nothing but a vague belief on the part of his family and himself that education is a desirable thing and may eventually help him on in the world. An astonishing number of boys would doubtless stay in school two years longer if both they and their families were convinced that their education had a more direct bearing upon their future wage earning. [page 4]

If one could decide advantageously for a boy of fourteen, whether he was to have a trade or a profession, and in the former case the particular trade, the situation would be simplified. It would, however, be a very bold teacher who should attempt to decide definitely for a child of fourteen, especially if she had taught him for but one year and he was one out of a room full of forty-five or fifty pupils. But the educator can say with confidence to this boy: "You are going to live in an industrial age and community, and it is important that you begin to find out now that which will help you decide which trade or profession you will follow, that you begin to get ready directly for your future work."

It is the business of all education to relate the child's activity to that of the community, to fit him to understand the environment in which his days will be passed, and, in an industrial community, to so train him that when he looks at a manufactured object he is able to comprehend not only its purpose but something of the intricate and historical processes of its production. The education which would relate the fourteen year old boy to the industrial community in which he lives must consist in a very large measure of actual training in industrial processes. The boy must perform with his own hands the basic techniques upon which at least one great type of the community industry is based. It is only through such genuine training that he can comprehend an industrial civilization.

It is a curious thing that a city or town cannot sustain a fine orchestra unless there are among its inhabitants a large number of people who know the technique of music, and who actually play a piano or blow a horn. If the orchestra depends upon people who merely listen to music, who have read books about it, or go to Europe in order to hear it, the orchestra is not sustained. The same thing is true of an art gallery. A city cannot maintain a genuine art gallery unless it has a number of artists, who intelligently use paint, brushes and canvas. The same thing is also true of industry.

To live intelligently in an industrial community and to interpret it in terms of culture, we must have educated people who know it from the standpoint of technique. Therefore, for those two years between fourteen and sixteen, education must [page 5] be planned so seriously and definitely that it will be actual trade training so far as it goes, but the implications, the connections, the relations of what the child does to the industrial world, must be constantly made clear to him. Without the first he will have no real industrial discipline; without the second no cultural education. In order to make this technical training convince the child that he is preparing to earn a living, it must be painstaking. Great attention must also be given to the conditions under which money will be paid for his industrial skill. If this education is successful, then at sixteen, (the age which manufacturers, trade unionists and the world as a whole has decided as the best time for actually beginning to learn a trade), some definite opportunity will have been given to discover aptitudes and tastes.

I confess that I have become a little confused during these conferences. In one speech we are told that the old trades are gone, that the man in a modern factory only makes a part of a part, and needs no trade training. Then the next speaker asserts that the apprenticeship system has been lately revived and adapted to modern factory conditions, and that the boy is getting an all around industrial trade training in certain factories, better than he ever had before. If the first statement is in any measure true, it is most important that a boy should have some cultural understanding, some general comprehension of modern industry. A man who makes year after year but one small wheel in a modern watch factory may, if he be trained, have a fuller life than the old watch-maker did when he sat down and made the watch from beginning to end, but it would be a very brave person who would now assert that the worker enjoys such a life.

It takes thirty-nine people to make a coat in a modern tailoring establishment, yet those thirty-nine people might go at it in a spirit of "team work" which would make the entire process as much more interesting than the work of the old solitary tailor, as a team of [baseball] players affords more pleasure to a boy than that afforded by a solitary game of [handball] on the side of the barn. But in order to make your watch wheel or your coat collar interesting, they must be related, not only to the article of which they are a part, but the [page 6] worker must have some sort of a comprehension of the industrial era in which he happens to be born. He must, above all, be taught by educators of originality, teachers familiar with the factory, not only in theory but also in technique.

Let us not make up our minds too hastily that there is no cultural value in industrial education, and let us refrain from dogmatism as to the time when trade education should begin. Let us by all means fit this trade education not only into the existing organization of the factories on the one hand, but into the existing organization of the schools on the other. It may be possible to bring the two things together in some definite educational relation. Addams expands on the cultural values taught in industrial education and training.