The Message of a Good Woman; Review of  Democracy and Social Ethics, April 16, 1902 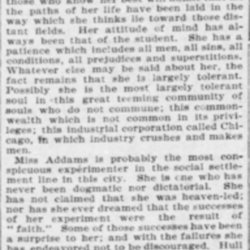 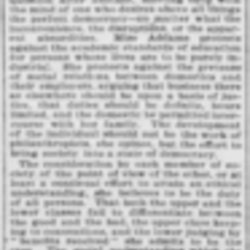 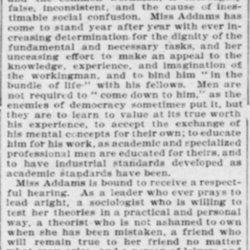 The Message of a Good Woman.

"It is insanity to expect to receive the data of wisdom by looking on. We arrive at moral knowledge only by tentative and observant practice. We learn how to apply the new insight by having attempted to apply the old and having found it to fail." So quotes Jane Addams in her book -- her first book -- entitled "Democracy and Social Ethics." (The Macmillan company. New York.) Jane Addams does not pretend to wisdom -- though there are few who will deny to her the possession of that quality -- but she admits that she is in search of it, and those who know her best will admit that all the paths of her life have been laid in the way which she thinks lie toward those distant fields. Her attitude of mind has always been that of the student. She has a patience which includes all men, all sins, all conditions, all prejudices and superstitions. Whatever else may be said about her, the fact remains that she is largely tolerant. Possibly she is the most tolerant soul in this great teeming community of souls who do not commune; this commonwealth which is not common in its privileges; this industrial corporation called Chicago, in which industry crushes and makes men.

Miss Addams is probably the most conspicuous experimenter in the social settlement line in this city. She is one who has never been dogmatic nor dictatorial. She has not claimed that she was heaven-led, nor has she ever dreamed that the successes of her experiment were the result of "faith." Some of those successes have been a surprise to her; and with the failures she has endeavored not to be discouraged. Hull House has not done all it was hoped it might do. "I cannot tell," Miss Addams has often said, "whether Hull House has or has not made the community better. There are no fewer saloons; politics is the same condition that it was; the streets are as filthy, or almost so, but a number of us have enlarged our acquaintance. We have all felt "friendly." It may be hardly fair to quote spoken words used by Miss Addams, particularly as the possibility exists that they may not be quoted with perfect accuracy. But the fact remains that with growing experience and understanding and religious consciousness, Miss Addams has come to stand at last firmly upon one firm spot in the morass of sociological bewilderment. To make for the social good is her one definite desire. To preach the social good is her message. It will be best to use her own words: "The necessity of seducing the (ethical) experiment to action throws out of the undertaking all timid and irresolute persons, more than that, all those who shrink before the need of striving forward shoulder to shoulder with cruder men, whose sole virtue may be social effort, and even that not untainted by self-seeking, who are indeed, pushing forward social morality, but who are doing it irrationally and emotionally, and often at the expense of the well-settled standards of morality. The power to distinguish between the genuine effort and the adventitious mistakes is perhaps the most difficult test which comes to our fallible intelligence. In the range of individual morals, we have learned to distrust him who would reach spirituality by simply renouncing the world, or by merely speculating upon its evils. The result, as well as the process of virtues attained by repression, has become distasteful to us. When the entire moral energy of an individual goes into the cultivation of personal integrity, we all know how unlovely the result may become; the character is upright, of course, but too coated over with the result of its own endeavor to be attractive. In this effort toward a higher morality in our social relations we must demand that the individual shall be willing to lose the sense of personal achievement, and shall be content to realize his activity only in connection with the activity of the many. The cry of 'back to the people' is always heard at the same time, when we have the prophet's demand for repentance or the religious cry of 'Back to Christ,' as though we would seek refuge with our fellows and believe in our common experiences as a preparation for a new moral struggle."

[Tolstoy] has one question to ask of all who submit a book or a theory upon question of moral reform. "Is he clear?" thunders the old sage, who, however much he may be interested in the dissatisfaction of man, denies him the right to disturb the world with that dissatisfaction until he has something to offer in the way of comfort or alleviation.

Miss Addams is clear. She has not been precipitate in the preparation of her book. She has reconsidered, corrected, and recorrected it, spoken with temperance and courtesy, and with full appreciation of the efforts of the aspiring individualist, though she is herself no individualist, but a Socialist through and through. She takes up one question after another, meeting each with the mind of one who desires above all things the perfect democracy -- no matter what the inconvenience, the disruptions, or the apparent absurdities Miss Addams protests against the academic standards of education for persons whose lives are to be purely industrial. She protests against the pretense of social relations between domestics and their employers, arguing that business there as elsewhere should be upon a basis of justice, that duties should be definite, hours limited, and the domestic be permitted intercourse with her family. The development of the individual should not be the work of philanthropists, she opines, but the effort to bring society into a state of democracy.

The consideration by each member of society of the point of view of the other, or at least a continual effort to attain an ethical understanding, she believes to be the duty of all persons. That both the upper and the lower classes fail to differentiate between the good and the bad, the upper class keeping to conventions, and the lower judging by "benefits received" she admits to be the case. The social understanding which she hopes for in some happier future may be indicated to some extent by the following excerpt: "A mother who eats her Christmas turkey in a reverent spirit of thankfulness to the Alderman who gave it to her might be brought to a genuine sense of appreciation and gratitude to the city which supplies her little children with a kindergarten, or to the Board of Health, which properly placarded a case of scarlet fever next door and spared her sleepless nights and wearing anxiety, as well as the money paid with such difficulty to the doctor and the druggist. The man who in his emotional gratitude almost kneels before his political friend who gets his boy out of jail might be made to see the kindness and good sense of the city authorities who provided the boy with a playground and reading-room, where he might spend his hours of idleness and restlessness, and through which his temptations to petty crime might be averted. A man who is grateful to the Alderman who sees that his gambling and racing are not interfered with might learn to feel loyal and responsible to the city which supplied him with a gymnasium and swimming tank, where manly and well-conducted sports are possible. The voter who is eager to serve the Alderman at all times, because the tenure of this job is dependent upon Aldermanic favor, might find great relief and pleasure in working for the city in which his place was secured by a well-administered civil service law.

Miss Addams remarks that in certain stages of moral evolution a man is incapable of action unless the results will benefit himself of some one of his acquaintances, and it is a long step in moral progress to set the good of many before the interest of the few, and to be concerned for the welfare of a community without hope of an individual return.

Such standards of universal kindness and interest does Miss Addams hold before the selfish and concentered gaze of her fellow beings. Her message is what almost every one will expect it to be, but not every one will be prepared for the temperature nature of her statements and arguments, and for the entire absence of anything like fanaticism in the book. As gentle, as patient, as sincere, and as astute as Jane Addams herself is the philosophy set forth in these pages. The brevity of the book is something of a disappointment, for though there are 277 pages of fair-sized type, one has the feeling that the author has spoken with modest hesitancy, and could have said much more had she been so inclined. The processes of Miss Addams' thought are interesting to thousands. The sense that none of us is living up to the best idea of democracy is upon each of us. The effort seen upon every hand to educate boys and girls for a condition of gentility, often spurious, leaving behind, as a creature not yet developed, the mechanic and the common workman, is thoroughly false, inconsistent, and the cause of inestimable social confusion. Miss Addams has come to stand year after year with ever increasing determination for the dignity of the fundamental and necessary tasks, and her unceasing effort to make an appeal to the knowledge, experience, and imagination of the workingman, and to bind him "in the bundle of life" with his fellows. Men are not required to "come down to him," as the enemies of democracy sometimes put it, but they are to learn to value at its true worth his experience, to accept the exchange of his mental concepts for their own; to educate him for his work, as academic and specialized professional men are educated for theirs, and to have industrial standards developed as academic standards have been.

Miss Addams is bound to receive a respectful hearing. As a leader who ever prays to lead aright, a sociologist who is willing to test her theories in a practical and personal way, a theorist who is not ashamed to own when she has been mistaken, a friend who will remain true to her friend no matter what may arise, a person of leisure and power who has the civic interest at heart, she has come to be prized as one of the chief of citizens. Her words, spoken with profound disinterestedness, should be received with gratitude, as a gift to those who have not, in the pressure of family or business life, found time for such fine experiments as those which Miss Addams has been able to make. From the great army of men and women similarly employed in sociological research and demonstration Miss Addams will receive utmost consideration. 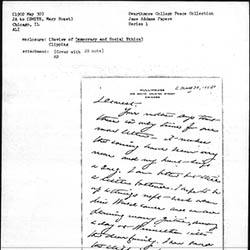 Newspaper clipping of a review of Democracy and Social Ethics.