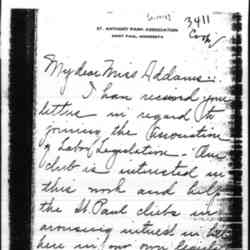 Elfleda Haecker Lansing attended the University of Minnesota and received an M.A. in English Literature at the University of Nebraska. She was associated with the Minnesota Board of Missions and was the recording secretary for the American Citizenship Club of St. Anthony Park.