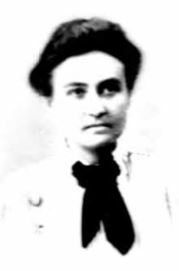 Anna Bates Hersman was the sister of Charles W. Bates, the general counsel for the receiver of the United Railways Company. She attended Missouri University, earning her Ph.D. After graduating, Hersman became an English teacher at Hull-House and also taught at Hyde Park High School. In 1919, Hersman was admitted to practice law in the Federal Court of St. Louis.

Hersman married Charles Finley Hersman in 1894, though he died in 1895. Hersman died in 1948 after presumably committing suicide.