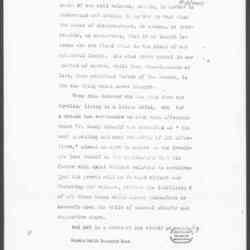 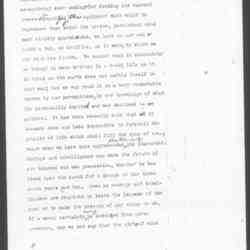 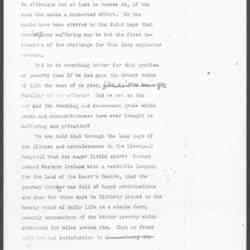 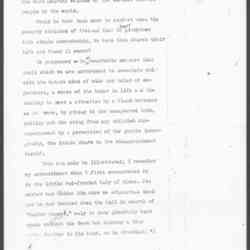 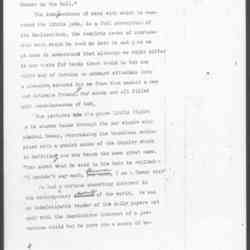 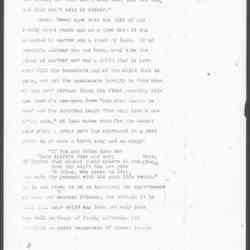 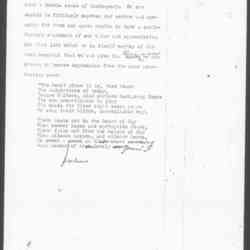 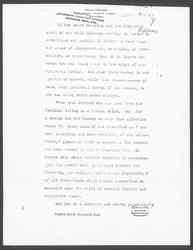 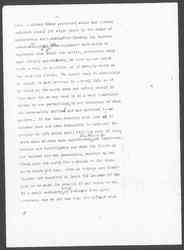 In the heart breaking and awe inspiring death of our well beloved, nothing is harder to understand and nothing is harder to bear than the sense of disappearance, so sudden, so irrevocable, so mysterious, that it at length becomes the one fixed point in the midst of our ephemeral living. All else grows unreal in our period of sorrow, while that consciousness of loss, that perpetual defeat of the senses, is the one thing which never changes.

When this beloved who has gone from our familiar living is a little child, who for a decade has surrounded us with that affection which Mr. Dewey himself has described as "the most appealing and most rewarding of all affections," almost as hard to endure as the immediate loss itself is the realization that his future will exist without relation to ourselves that his growth will go forward without our fostering and defense, without the fulfilling of all those hopes which fasten themselves so securely upon the child of unusual ability and suggestive charm.

And yet in a distinct and sturdy personality [page 2] such as Gordon Dewey possessed, which had already unfolded itself for eight years in the midst of exceptional surroundings for feeding its nascent powers, supplied with ↑& for supplying the↓ equipment with which to reproduce that which the active, persistent mind most vividly apprehended, we have in our own hands a key, an artifice, as it were, by which we may read his future. We cannot read it absolutely as though it were written in a book; life as it is lived on the earth does not unfold itself in that way; but we may read it in a very remarkable degree by our perceptions, by our knowledge of what his personality implied and was destined to achieve. It has been recently said that if it becomes less and less impossible to foretell the quality of life which shall fill the span of a ↑man's↓ years when we have once apprehended ↑the trend of↓ his character. Courage and intelligence can make the future of our beloved our own possession, whether he has lived upon the earth for a decade or for three score years and ten, even as courage and intelligence are required to learn the lessons of the past or to make the present of any value to us. If a moral certainty ↑may↓ be deducted from given premises, may we not say that the gifts of mind [page 3] and remarkable character of Gordon Dewey have placed these premises within our grasp.

To know such a promising life, to feel the touch of his spirit, is to have the future unfold itself before us in a new amplitude, to give it a larger meaning; it is to recover for a moment [those] hopes of our youth which we have dropped in our dull discouragement with life's limitations, to be revisited by the bright-eyed phantom who declares that all things are possible.

Country people among whom so much of Gordon Dewey's life was spent during his long, happy summers, and those simple, warm hearted folk among whom he at last died, firmly believe that the child who is destined to leave this life prematurely is blessed with a premature unfolding.

It is certainly safe to predict that this fine and gallant spirit would inevitably ↑have entered↓ into that bitter heritage which is sure to come to all the sensitive spirits of our contemporary life, that he was destined to feel the smart and pang of ↑brought by the consciousness of↓ the degrading poverty in the world, as he would have shared the growing belief newly [page 4] come among men, that it may be possible not only to alleviate but at last to remove it, if the race but makes a concerted effort. He too would have been stirred by the faint hope that our useless ↑helpless↓ suffering may be but the first intimation of the challenge for this long neglected crusade.

Did he do something better for this problem of poverty than if he had gone the dreary round of life the rest of us plod, [illegible words] ↑filled with a sense of the↓ futility of our efforts? Did he not at the end add the touching and evanescent grace which youth and unconsciousness have ever brought to suffering and privation?

We are told that though the long days of the illness and convalescence in the Liverpool Hospital that his eager little spirit turned toward Western Ireland with a veritable longing for the Land of the Heart's Desire, that the journey thither was full of happy anticipations, and that for three days he blithely joined in the homely round of daily life on a simple farm, sweetly unconscious of the bitter poverty which stretched for miles around him. That he found only joy and satisfaction in the comforts the [page 5] "↑the↓ milk and ↑the↓ fire" in the comradeship of ↑care of the↓ animals, ↑in↓ the warmhearted welcome of the warmest hearted people in the world.

Could he have done more to comfort even the poverty stricken of Ireland than to ↑have↓ given them this simple comradeship, to have thus shared their life and found it sweet?

He possessed a in ↑a↓ remarkable measure that trait which we are accustomed to associate only with the mature mind of wide and tolerant experience, a sense of the humor in life and the ability to meet a situation by a flank movement as it were, by giving it the unexpected turn, pulling out the sting from any childish disappointment by a perception of the gentle incongruity, the ironic charm in the disappointment itself.

This can only be illustrated; I remember my astonishment when I first encountered it in the little red-frocked baby of three. His mother had bidden him show me a Christmas book and he had trotted down the hall in search of "Father Goose," only to come gleefully back again without the book but holding a tiny white feather in his hand, as he chuckled;: "I [page 6] couldn't find Fazzer Goose, but I found a goose fezzer in the hall".

The independence of mind with which he ventured the little joke, in a full perception of the implications, the complete sense of comradeship with which he took me into it and gave me at once to understand that although we might differ in our tastes for books, there could be but one right way of turning an awkward situation into a pleasure, secured for me from that moment a new and intimate friend.

Our minds are all filled with reminiscences of him. One pictures him the grave little figure as he shakes hands through the car window with Admiral Dewey, restraining his boundless enthusiasm with a quaint sense of the dignity which is befitting one who bears the same great name. When asked what he said to his hero he replied:-- "I couldn't say much, you know, ↑because↓ I am a Dewey too".

He had a curious absorbing interest in the contemporary advance ↑events↓ of the world. He was an indefatigable reader of the daily papers not only with the inquisitive interest of a precocious child but he gave you a sense of belonging [page 7] to it all, of holding an integral part in the drama; a tiny protagonist of his time.

One recalls his unexpected query across the breakfast table as the chances of the Japanese in the war and his recital of cogent reasons for the ↑his↓ predicted outcome of the struggle. His direct connection of the defeat in Manchuria with the governmental wrongs of the Empire, revealed that serene sense of righteousness which children so often have, and which we later lose in the confusion of life.  His eager assertion "They must be beaten you know because they have been so mean to the Poles and Finns," gave me the same sense of astonishment at the wisdom of the child of seven that I had felt at the wit of the child of three, the curious consciousness that he had thus early acquired the freedom of the human city as it were, and would forever go prowling about ↑more walk↓ its motley streets with the wise and tolerant vision.

We are told of his standing in that familiar window overlooking the park and saying; "The birds do lots of good, don't they, but they don't know that they are doing any good; they just can't help it. And there are lots of things that are [page 8] bad like the worms that eat the leaves off of the trees, but they don't know that they are bad, and they can't help it either."

Gordon Dewey came into the life of his family eight years ago at a time when it was shadowed by sorrow and a sense of loss. By no possible alchemy can one human soul take the place of another nor can a child that is here ever fill the household gap of the child that is gone, and yet the passionate loyalty to "him whom we see not" perhaps finds its first yearning solace from the new–born from "him whom scarce we see" and the stricken heart "for very love's undying sake," at last makes room for the secret hope which a great poet has expressed in a poem which is at once a birth song and an elegy:

"If his and thine have met
Where spirits rise and set;
If lights that change their sphere in changing ↑meet,↓
Some ray might his not give
To thine, who comes to live,
And make thy present with his past life sweet."

It is not given to us to interpret the experiences of even our dearest friends, but certain it is that this dear child was born not only into his full heritage of family affection, but received an added tenderness of almost tragic [page 9] [passion].

Our hearts yearn toward that stricken family group across the sea and we are overwhelmed with a double sense of inadequacy. We are unable to fittingly express our sorrow and sympathy for them and again unable to make a satisfactory statement of our value and appreciation for that life which is in itself worthy of the best memorial that we can give it. Again ↑Once more↓ we are driven to borrow expression from the same penetrating poet:

"The heart alone it is, that hears
The salutations of today,
Tongue falters, mind shrinks back, song fears
Its own unworthiness to play
Fit music for those eight sweet years
Or sing their blithe, accomplished way.


There beats not in the heart of May
When summer hopes and springtide fears,
There falls not from the height of day
When silence speaks, and silence hears,
So sweet a sound ↑psalm↓ as those ↑that↓ sweet, yours ↑way↓
Each moment of that ↑those↓ lovely way ↑years↓." Draft of Addams' eulogy for Gordon Dewey, who died at eight years of age.