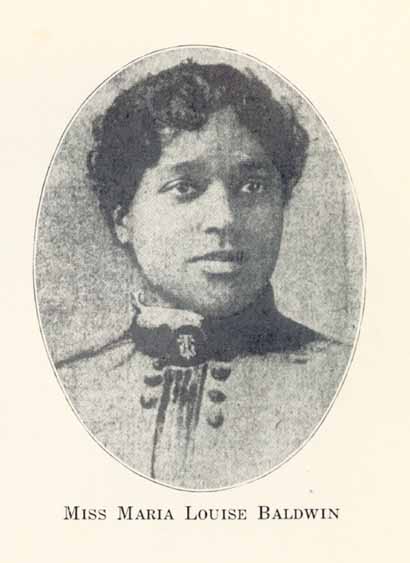 Maria Louise Baldwin was an African-American educator. Born and raised in Cambridge, Baldwin graduated from Cambridge High School in 1874 and graduated from the Cambridge training school for teachers a year later. She taught in Chesterville, Maryland, and at the Agassiz Grammar School of Cambridge before becoming Agassiz's principal in 1889, making her the first African-American female principal in the Northeast. In 1916 a new Agassiz school was built, and Baldwin was made the schoolmaster, making her the second woman to hold the position in Cambridge and the first African-American in New England. Under her leadership, the Agassiz school became one of the best schools in the city and the first to have a school nurse. Baldwin also taught classes for teachers at Hampton institution in Virginia and the Institute for Colored Youth in Cheyney, Pennsylvania. She was a member of the Twentieth Century Club, the Cantabrigia Club, the Boston Ethical Society, and the league of women for Community Service. In 2004 the Agassiz school was renamed the Maria L. Baldwin school.

Picture from Documenting the American South