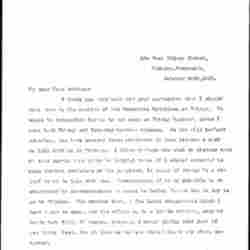 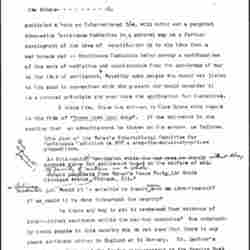 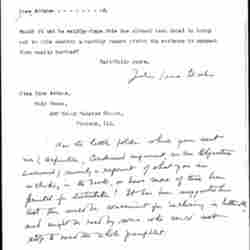 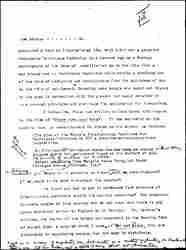 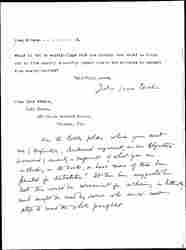 I thank you very much for your suggestion that I should come down to the meeting of the Executive Committee on Friday. It would be impossible for me to get away on Friday however, since I have both Friday and Saturday morning classes. As you will perhaps remember, you have several times mentioned in your letters a wish to talk with me in Chicago. I think perhaps you wish to discuss with me some points that might be helpful to me if I should endeavor to make further revisions of the pamphlet. It would of course be a relief to me to talk with you. Nevertheless if it is possible to do everything by correspondence it would be better for me not to try to go to Chicago. The routine here, a few local engagements which I have taken to speak and the effort to do a little writing, keep my hands very full. Of course, however, I would gladly come down if you think best, for in this matter one cannot leave any stone unturned.

I am most thankful that Dr. Jordan is to see the President. I shall prepare some further arguments to give him when he is in Madison. I enclose a clipping from yesterday's Journal which has an encouraging sound. It is extremely encouraging also that the Canadian women have so urgently desired Miss Macmillan to come to Toronto.

We had a meeting yesterday of the Madison Committee on Mediation. It is possible that Prof. A. B. Hall, who this summer [page 2] published a book on International Law, will bring out a pamphlet discussing Continuous Mediation in a general way as a further development of the idea of conciliation up to the time that a war breaks out -- Continuous Mediation being merely a continuation of the work of mediation and conciliation from the out-break of war to the time of settlement.* Possibly some people who would not listen to the plan in connection with the present war would consider it as a general principle and even make the application for themselves.

I think Mrs. Vilas has written to Miss Hyers with regard to the film of "Throw down your Arms". It was suggested in the meeting that an advertisement be thrown on the screen as follows:

"The plan of the Woman's International Committee for Continuous Mediation is NOT a stop-the-war-at-any-price" proposition.

An International Commission while the war goes on should <without delay> propose plans for settlement based on the welfare of all. <the family of nations as a whole.>

Would it be sensible to insert <some> such an advertisement? If so, could it be done throughout the country?

Is there any way to get in condensed form evidence of international sentiment within the warring countries? One constantly meets people in this country who do not know that there is any peace sentiment either in England or in Germany. Mr. Lochner's article, the letter of the London correspondent in the Evening Post of August 21st, a copy of which I have of War and Peace, etc. are invaluable in convincing people, but not easy to distribute. [page 3] Would it not be well (perhaps this has already been done) to bring out in this country a monthly report giving the evidence in compact form easily handled?

<Was the little folder which you sent me (Definition, Condensed argument, [and] an Objection Answered) merely a reprint of what you are including in the book, or have more of these been printed for distribution? It has been suggested here that they would be convenient for [enclosing] in letters <etc.>, and might be read by some who would not stop to read the whole pamphlet.>

<*not as a means of regulating war, but rather as a method of putting on brakes to end <stop> a war that has broken out in spite of every effort at prevention.> 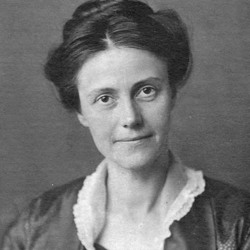 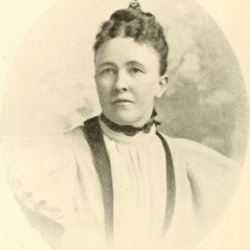 Wales discusses peace propaganda, including Continuous Mediation pamphlets and the film Throw Down Your Arms.

Pages 2-3 of this document are held by the Swarthmore Peace Collection.