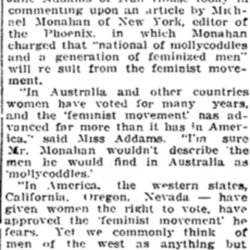 Jane Addams Sees No Danger of a Race of "Mollies"

CHICAGO. Dec. 3. -- "Mr. Monahan is off the track, historically," said Miss Jane Addams of Hull House today in commenting upon an article by Michael Monahan of New York, editor of the Phoenix, in which Monahan charged that "national of mollycoddles and a generation of feminized men" will result from the feminist movement.

"In Australia and other countries women have voted for many years, and the 'feminist movement' has advanced far more than it has in America," said Miss Addams. "I'm sure Mr. Monahan wouldn't describe the men he would find in Australia as 'mollycoddles.'

"In America, the western states, California, Oregon, Nevada -- have given women the right to vote, have approved the 'feminist movement' he fears. Yet we commonly think of men of the west as anything but mollycoddles.

"Why, out in Nevada in the recent suffrage campaign I spoke before the roughest kind of men, rough in the sense of the kind of work they do, I mean, and they are the men who gave votes to the women of Nevada. They were some of the best specimens of physical manhood I never have seen. [Surely] Mr. Monahan doesn't believe [those] men are going to degenerate into 'mollycoddles.'"

Addams argues that feminism does not turn men into "mollycoddles."