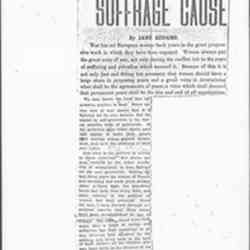 JANE ADDAMS ON SUFFRAGE CAUSE

War has set European women back years in the great progressive work in which they have been engaged. Women always pay the great costs of war, not only during the conflict but in the years of suffering and privation which succeed it. Because of this it is not only just and fitting but necessary that women should have a large share in proposing peace and a great voice in determining what shall be the agreements of peace, a voice which shall demand that permanent peace shall be the aim and end of all negotiations.

We may thank the Lord that aggressive warfare is dead. Every nation now at war claims that it is fighting for its own [defense]. But the appeal to self-protection is the lowest possible form of patriotism. In the primitive days tribal chiefs used this appeal to make their people fight nations whose growth threatened, they said, the existence of their own tribes.

And what is the position of women in these countries? Her status has been reduced to the tribal conception of womanhood, to bear fighters for the next generation. During the last three years the women of France and Germany had made great strides. After a hard fight the foundling boxes had been done away with, and other reforms in the position of women had been achieved. Since the war, I have learned through accredited sources that these boxes have been [reestablished] by law in France. The [report] comes from Germany that a corps of nurses and midwives has been organized to go into districts first occupied by the soldiers and bring back to the land of their fathers all the children who owe their birth to the advance of the soldiers. France, I understand, is doing the same thing.

The women who generation after generation have borne the people of this world, have suffered all they can. They can go no further. Those in the belligerent countries are already crying out for help. Women in the neutral countries are more free and must start a protest.

War shows that women should have a voice (the ballot) in every affair of world's nations.

If woman would [fulfill] her traditional responsibility to her own children; if she would educate and protect from danger factory children who must find their recreation on the street; if she would bring the cultural forces to bear upon our materialistic civilization; and if she would do it all with the dignity and directness fitting one who carries on her immemorial duties, then she must bring herself to the use of the ballot -- that latest implement for self-government. May we not fairly say that American women need this implement in order to preserve the home?

Addams argues the point that women need the right to vote in all national affairs to force the issue of peace, and to help prevent future wars from happening.