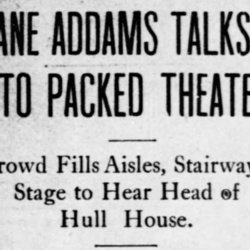 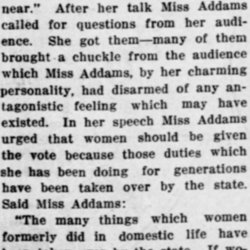 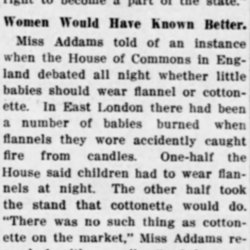 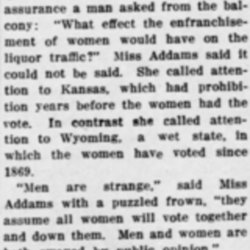 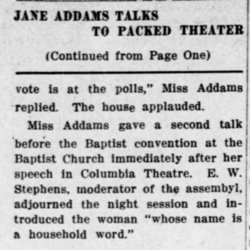 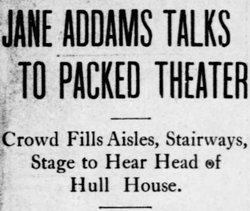 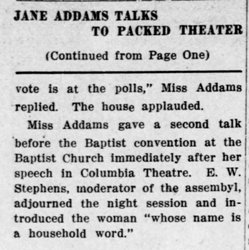 "I come to tell the reason for equal suffrage. I did not come to urge the cause, but to remove objections, because the chance for action is so near." After her talk Miss Addams called for questions from her audience. She got them---many of them brought a chuckle from the audience which Miss Addams, by her charming personality, had disarmed of any antagonistic feeling which may have existed. In her speech Miss Addams urged that women should be given the vote because those duties which she has been doing for generations have been taken over by the state. Said Miss Addams:

"The many things which women formerly did in domestic life have been taken over by the state. If women are not allowed to have a voice in how the state does these things she will be left in a certain idleness and the things themselves will be [page 3] less well done. Women say that because the education of little children, the food they eat and the home they live in have been taken under the direction of the state through milk inspectors, house inspectors and teachers who must be trained in public institutions---they say they have a right to become a part of the state."

Women Would Have Known Better.

Miss Addams told of an instance when the House of Commons in England debated all night whether little babies should wear flannel or cottonette. In East London there had been a number of babies burned when flannels they wore accidently caught fire from candles. One-half the House said children had to wear flannels at night. The other half took the stand that cottonette would do. "There was no such thing as cottonette on the market," Miss Addams remarked with a smile, "and it never occurred to the House that perhaps women knew something about it."

Miss Addams is of medium height and size. Her dark hair, just turning grey, was parted in the middle and done low; eyes, deep set and a most pleasant face, yet with a remarkably [page 4] firm set chin. She wore a blue skirt, a full-length black coat beaded along the edges and a white shirt waist with soft collar. A lorgnette swung from a black ribbon about her neck. And as she talked she held a little gold watch in her left hand, now and then emphasizing her remarks with a movement of her right arm. But the distinctive things about Jane Addams are her naturalness and her voice---a gentle voice which quickly wins an audience.

The audience was requested to ask questions. After some urging and reassurance a man asked from the balcony: "What effect the enfranchisement of women would have on the liquor traffic?" Miss Addams said it could not be said. She called attention to Kansas, which had prohibition years before the women had the vote. In contrast she called attention to Wyoming, a wet state, in which the women have voted since 1869.

"Men are strange," said Miss Addams with a puzzled frown, "they assume all women will vote together and down them. Men and women are both swayed by public opinion.

How Old Must They Be?

"How old must a woman be to vote?" asked an enthusiastic, girlish voice.

An inquiry as to the vote of the women of red-light districts came next. The speaker said that they did not vote in those cities in which they now had the right.

"Do all women who vote, vote at polls?" came from a woman in a shocked tone of voice.

"Yes, the only place anyone can [page 5] vote is at the polls," Miss Addams replied. The house applauded.

Miss Addams gave a second talk before the Baptist convention at the Baptist Church immediately after her speech in Columbia Theatre. E. W. Stephens, moderator of the assembly, adjourned the night session and introduced the woman "whose name is a household word."