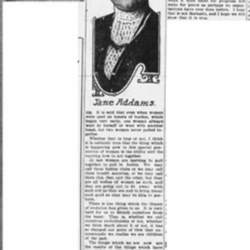 BY JANE ADDAMS.
(From an Address Before the Second Annual Peace Congress, Chicago).
[image of Jane Addams]

But we women never had this training. It is said that even when women were used as beasts of burden, which began very early, one woman always went by herself or went with another beast, but two women never pulled together.

Whether that is true or not, I think it is certainly true that the thing which is happening now to this special generation of women is the ability and the learning how to act together.

At last women are learning to pull together, to pull in bodies. We may call these bodies clubs or we may call them benefit societies, or we may call them this, that and the other, but they are all bodies of women as such, and they are going out to do away with such evil as they see and to bring about such good as they may be able to perform.

There is one thing which the theory of evolution has given to us. It is very hard for us to detach ourselves from the beast. That is, whether we call ourselves evolutionists or not, it has so changed our point of view that unconsciously we realize we are children of the past.

The things which we are now are the results of the things which have gone before us. If at last in the fullness of time it has come about that Anglo-Saxon women have received a larger measure of freedom, if they can go to clubs without being accused by the men of their family, or by the newspapers, which are often much worse, of neglecting their children at home in their cradles; if various things have happened so that we can without detaching ourselves too much from the past, organize into these clubs and movements, it is now up to us -- if I may use that phrase -- to see what we are going to do with this power of organization and with this new ability to act together.

If men learned it in fighting it may be harder for them to forget the method by which they learned it. It may always be harder for a body of men to go out to do things, to reform, than it will be for women. They are not quite free from the fighting instinct yet.

It is said that one of the charms of political life is the fighting element that still remains; the consciousness that you are one of a large body of men going out to battle against your enemy of the other party.

If we lack all of that training and have now come into this new movement with the power of acting together, we ought to bring a distinct factor into the peace of the world.

So it seems to me we are, as women's organizations, bringing into the civilizing forces -- or shall I say social forces? -- or those things which make for progress, a new combination which while it does make for progress will make for peace as perhaps not organizations have ever done before. I hope that is not fantastic, and I hope we will show that it is true. 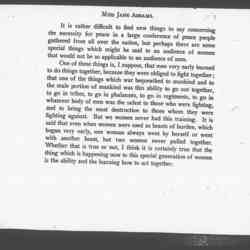 A portion of Addams' speech from the Second Annual Peace Conference on May 4, 1909 about what women have done that have earned them suffrage.