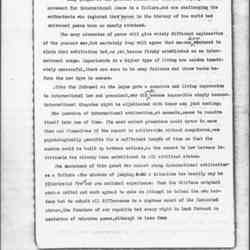 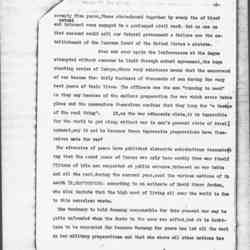 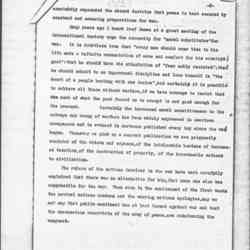 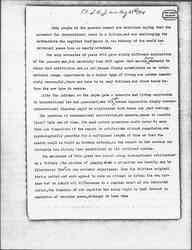 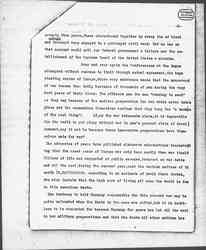 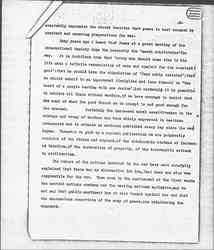 Many people at the present moment are doubtless saying that the movement for International Peace is a failure, and are challenging the enthusiasts who insisted that never in the history of the world had universal peace been so nearly attained.

The many advocates of peace will give widely different explanation of the present war, but certainly they will agree that [no one] <ever> ventured to claim that arbitration had, as yet, become firmly established as an international usage. Experiments in a higher type of living are seldom immediately [successful], there are sure to be many failures and throw backs before the new type is secure.

[Although] the Tribunal at the Hague gave a concrete and living expression to international law and precedent, war did <not> become impossible simply because international disputes might be adjudicated with honor and just dealing.

The question of international arbitration, at moments, seems to resolve itself into one of time. Its most ardent promoters could never do more than ask themselves if the resort to arbitration without compulsion, was psychologically possible for a sufficient length of time so that the custom could be built up between nations, as the resort to law between individuals has already been established in all civilized states.

The occurrence of this great war cannot stamp international arbitration as a failure. The mistake of judging such a situation too hastily may be illustrated from our national experience: When the thirteen original states united and each agreed to make no attempt to defend its own borders but to submit all differences to a supreme court of the federated states, the founders of our republic had every right to look forward to centuries of unbroken peace, although in less than [page 2] seventy five years, these states bound together by every tie of blood and <mutual> interest were engaged in a prolonged civil war. Yet no one on that account would call our federal government a failure nor the establishment of the Supreme Court of the United States a mistake.

Over and over again the Conferences at the Hague attempted without success to limit through mutual agreement, the huge standing armies of Europe, whose very existence means that the [maneuvers] of war become the daily business of thousands of men during the very best years of their lives. The officers see the men "running to seed" as they say because of the endless preparation for war which never takes place and the commanders themselves confess that they long for "a taste of the real thing". If, as the war adherents claim, it is impossible for the world to get along without war in man's present state of [development], may it not be because these impressive preparations have themselves made for war?

The advocates of peace have published elaborate calculations demonstrating that the armed peace of Europe was only less costly than war itself. Millions of idle men supported at public expense, interest on war debts and all the rest, during the current year, cost the various nations of [the] earth [$2,000,000,000] according to an estimate of David Starr Jordan, who also insists that the high cost of living all over the world is due to this senseless waste.

The tendency to hold Germany responsible for this present war may be quite unfounded when the facts in the case are sifted, but it is doubtless to be accounted for because Germany for years has led all the world in her military preparations and that she above all other nations has [page 3] constantly expounded the absurd doctrine that peace is best secured by constant and menacing [preparations] for war.

Many years ago I heard Prof James at a great meeting of the International Society urge the necessity for "moral substitutes" for war. It is doubtless true that "every man should some time in his life make a definite renunciation of ease and comfort for his country's good"; that he should have the stimulation of "fear nobly resisted"; that he should submit to an impersonal discipline and lose himself in "the heart of a people beating with one desire", but certainly it is possible to achieve all these without warfare, if we have courage to insist that the much of what the past forced us to accept is not good enough for the present. Certainly the increased moral sensitiveness to the outrage and wrong of warfare has been widely expressed in American newspapers and is evinced in cartoons published every day since the war began. Whenever we pick up a current publication we are poignantly reminded of the widows and orphans, of the intolerable burdens of increased taxation, of the destruction of property, of the irrevocable setback to civilization.

The rulers of the nations involved in the war have each carefully explained that there was no alternative for him, that some one else was responsible for the war. When even in the excitement of the first weeks the neutral nations condemn and the warring nations apologize, may we not say that public sentiment has at last turned against war and that the unconscious reservists of the army of peace, are reinforcing the vanguard. 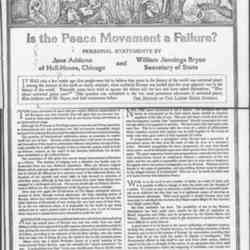 Is the Peace Movement a Failure?, November 1914

Addams argues that international peace is not a failed idea, and even though World War I is in the early stages of fighting it is not too late to stop war from continuing.