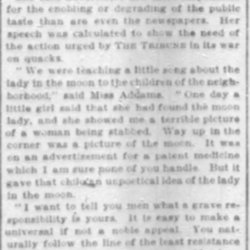 Tells Incident of Hull House in a Speech Before Advertisers' Club -- Cites Influence on Foreigners.

Miss Jane Addams yesterday politely slapped at advertisers who puff quack cures when she recited an incident of Hull house in a speech before the Advertisers' club.

She said advertisers are more responsible for the [ennobling] or degrading of the public taste than are even the newspapers. Her speech was calculated to show the need of the action urged by THE TRIBUNE in its war on quacks.

"We were teaching a little song about the lady in the moon to the children of the neighborhood," said Miss Addams. "One day a little girl said that she had found the moon lady, and she showed me a terrible picture of a woman being stabbed. Way up in the corner was a picture of the moon. It was on an advertisement for a patent medicine which I am sure none of you handle. But it gave that child an unpoetical idea of the lady in the moon.

"I want to tell you men what a grave responsibility is yours. It is easy to make a universal if not a noble appeal. You naturally follow the line of the least resistance in selling goods. But you have no idea how much you effect the people on my side of town.

"You men by constant repetition of the advantages of your wares create a totem pole in the minds of these people. Their ideas and ideals are shaped by what you show them.

"You have in your hands the means of teaching the people. You create their taste in art and amusement. Whether that teaching is going to have a base appeal or an ennobling influence is for you gentlemen in this room to determine."

Addams speaks before the Advertisers' Club of an incident that happened at Hull-House.