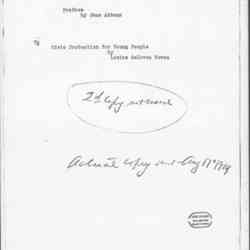 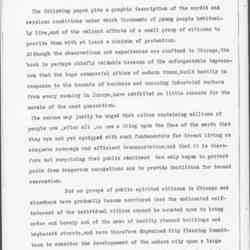 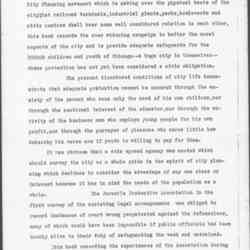 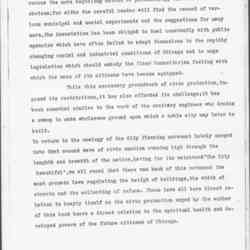 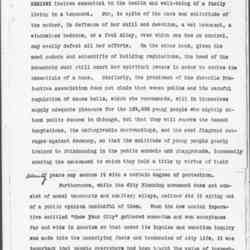 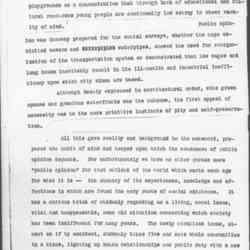 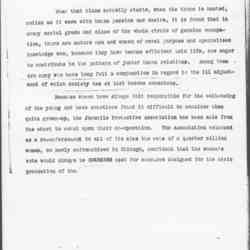 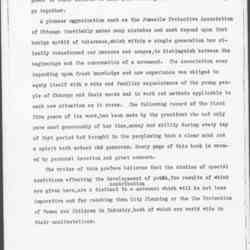 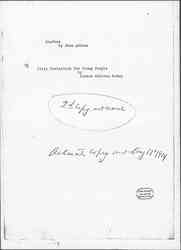 The following pages give a graphic description of the sordid and careless conditions under which thousands of young people habitually live, and of the [valiant] efforts of a small group of citizens to provide them with at least a minimum of protection.

Although the observations and [experiences] are confined to Chicago, the book is perhaps chiefly valuable because of the unforgettable impression that the huge commercial cities of modern times, built hastily in response to the demands of business and amassing industrial workers from every country in Europe, have exhibited so little concern for the morale of the next generation.

The excuse may justly be urged that cities containing millions of people are, after all, so new a thing upon the face of the earth that they are not yet equipped with such fundamentals for decent living as adequate sewerage and efficient transportation; and that it is therefore not surprising that public sentiment has only begun to protect youth from dangerous occupations and to provide facilities for decent recreation.

But as groups of public spirited citizens in Chicago and elsewhere have gradually become convinced that the undirected self-interest of the individual citizen cannot be counted upon to bring order and beauty out of the mass of hastily planned buildings and haphazard streets, and have therefore organized City Planning Committees to consider the [development] of the modern city upon a large scale, so other groups such as the Juvenile Protection Association of Chicago have felt the need of organization in order to study and [page 3] ameliorate the conditions of city life as they affect the young.

Under the same sort of impulse as that back of the City Planning movement which is making over the physical basis of the city that railroad terminals, industrial plants, parks, boulevards and civic [centers] shall bear some [well-considered] relation to each other, this book records the ever widening campaign to better the moral aspects of the city and to provide adequate safeguards for the 882000 children and youth of Chicago -- a huge city in themselves -- whose protection has not yet been considered a civic obligation.

The present disordered conditions of city life demonstrate that adequate protection cannot be secured through the anxiety of the parent who sees only the need of his own children, nor through the sectional interest of the educator, nor through the activity of the business man who employs young people for his own profit, nor through the purveyor of pleasure who cares little how debasing his wares are if youth is willing to pay for them.

It was obvious that a [widespread] agency was needed which should survey the city as a whole quite in the spirit of city planning which declines to consider the advantage of any one class or interest because it has in mind the needs of the population as a whole. The Juvenile Protective Association in the first survey of the existing legal arrangements was obliged to record instances of overt wrong [perpetrated] against the [defenseless], many of which would have been impossible if public officials had been keenly alive to their duty of safeguarding the weak and untrained.

This book recording the [experiences] of the Association during the first five years of its existence, deals as a whole with the need for that groundwork of legal and civic protection in which [page 4] [Americans] are so sadly lacking. The limitations of protection versus the more beguiling method of philanthropy and education are obvious; for [although] the careful reader will find the record of various municipal and social experiments and the suggestions for many more, the Association has been obliged to deal constantly with public agencies which have often failed to adapt themselves to the rapidly changing social and industrial conditions of Chicago and to urge legislation which should embody the finer humanitarian feeling with which the mass of its citizens have become equipped.

While this necessary groundwork of civic protection, imposed its restrictions, it has also afforded its challenge; it has been somewhat similar to the work of the sanitary engineer who drains a swamp to make wholesome ground upon which a noble city may later be built.

To return to the analogy of the City Planning movement lately merged into that second wave of civic emotion running high through the length and breadth of the nation, having for its watchword "The City Beautiful", we all [recall] that there was back of this movement the most prosaic laws regulating the height of buildings, the width of streets and the collecting of refuse. These laws all bore direct relation to Beauty itself as the civic protection urged by the author of this book bears a direct relation to the spiritual health and developed powers of the future citizens of Chicago. [page 5]

City ordinances, however model, which regulate the building of tenement houses, do not in themselves make good homes, but they are nevertheless essential to the health and well-being of a family living in a tenement. For, in spite of the care and solicitude of the mother, in defiance of her skill and devotion, a wet basement, a windowless bedroom, or a foul alley, over which she has no control, may easily defeat all her efforts. One the other hand, given the most modern and scientific of building regulations, the head of the household must still exert her spiritual powers in order to evolve the essentials of a home. Similarly, the president of the Juvenile Protective Association does not claim that women police and the careful regulation of dance halls, which she recommends, will in themselves supply adequate pleasure for the 184,000 young people who nightly attend public dances in Chicago, but that they will remove the basest temptations, the unforgivable surroundings, and the most flagrant outrages against decency, so that the multitude of young people yearly trained to folk dancing in the public schools and playgrounds, innocently craving the amusement to which they hold a title by virtue of their <scanty> years may secure it with a certain degree of protection.

Furthermore, while the City Planning movement does not consist of model tenements and sanitary alleys, neither did it spring out of a public opinion unmindful of them. When the new social imperative entitled "Know Your City" gathered momentum and won acceptance far and wide in America so that under its impulse and sanction inquiry was made into the underlying facts and tendencies of city life, it was important that people everywhere had been taught the value of inspecting milk, the needlessness of tuberculosis, the necessity for good factory conditions, [page 6] long been Municipal Art Committees, that public schools had been supplied with good pictures, that trees had been planted in barren streets, that there had been much talk on the value of small parks and playgrounds as a demonstration that through lack of educational and cultural resources young people are continually led astray in sheer vacuity of mind.

Public opinion was thereby prepared for the social surveys, whether the maps exhibited sewers and [illegible] water pipes, showed the need for reorganization of the transportation system or demonstrated that low wages and long hours inevitably result in the ill-health and industrial inefficiency upon which city slums are based.

Although Beauty expressed in architectural order, wide green spaces and gracious waterfronts was the outcome, the first appeal of necessity was to the more primitive instincts of pity and self-preservation.

All this gave reality and background to the movement, prepared the habit of mind and temper upon which the soundness of public opinion depends. For unfortunately we have no other phrase save "public opinion" for that outlook of the world which marks each age for what it is -- the summary of its experiences, knowledge and affections in which are found the very roots of social existence. It has a curious trick of suddenly regarding as a living, moral issue, vital and unappeasable, some old situation concerning which society has been indifferent for many years. The newly moralized issue, almost as if by accident, suddenly takes fire and sets whole communities in a blaze, lighting up human relationships and public duty with a new meaning and in the end transforms an abstract social ideal into a political demand for new legal enactments. [page 7]

When that blaze actually starts, when the theme is heated, molten as it were with human passion and desire, it is found that in every social grade and class of the whole circle of genuine occupation, there are mature men and women of moral purpose and [specialized] knowledge who, because they have become efficient unto life, are eager to contribute to the pattern of juster human relations. Among them are many who have long felt a compunction in regard to the ill adjustment of which Society has at last become conscious.

Because women have always felt responsible for the well-being of the young and have sometimes found it difficult to consider them quite grown-up, the Juvenile Protective Association has been able from the start to count upon their [cooperation]. The Association welcomed as a [reinforcement] to all of its aims the vote of a quarter million women, so newly enfranchised in Chicago, confident that the women's vote would always be [illegible] cast for measures designed for the civic protection of the [page 8] ten statute may be changed, and [therefore] welcomed the new political power in their efforts to make just dealing and "the issue of things" go together.

A pioneer organization such as the Juvenile Protective Association of Chicago inevitably makes many mistakes and must depend upon that benign spirit of tolerance, which within a single generation has silently transformed our manners and usages, to distinguish between the beginnings and the consummation of a movement. The Association ever depending upon fresh knowledge and new [experience] was obliged to equip itself with wide and familiar acquaintance of the young people of Chicago and their needs and to work out methods applicable to each new situation as it arose. The following record of the first five years of its work, has been made by the president who not only gave most generously of her time, money and ability during every day of that period but brought to the perplexing task a clear mind and a spirit both ardent and generous. Every page of this book is warmed by personal devotion and great concern.

The writer of this preface believes that the studies of special conditions affecting the development of youth, the result of which are given here, are a distinct <contribution> to a movement which will be not less imperative and far reaching than City Planning or The Protection of Women and Children in Industry, both of which are [worldwide] in their manifestations. A preface by Addams for a book by Bowen, Civic Protection for Young People, explaining the importance the book it is written for, why it should be read and listened to concerning matters addressed in it.