Speech to the National Council of Women Voters, August 15, 1913 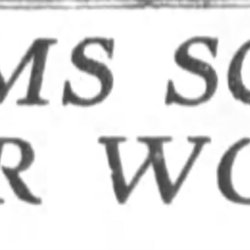 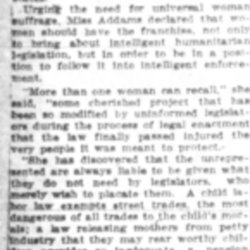 JANE ADDAMS SCORES LAWS
MADE FOR WOMEN BY MEN
[page 2]
_____
Declares Many Reform Measures Are Not Suitable
_____
No Relief Given in Recent Statutes Adopted by States.
_____

Urging the need for universal woman suffrage, Miss Addams declared that women should have the franchise, not only to bring about intelligent humanitarian legislation, but in order to be in a position to follow it into intelligent enforcement.

"More than one woman can recall," she said, "some cherished project that has been so modified by uninformed legislators during the process of legal enactment that the law finally passed injured the very people it was meant to protect.

"She has discovered that the unrepresented are always liable to be given what they do not need by legislators, who merely wish to placate them. A child labor law exempts street trades, the most dangerous of all trades to the child's morals; a law releasing mothers from petty industry that they may rear worthy children provides so inadequate a pension that overburdened women continue to face the necessity of neglecting their young in order to feed them."

The women police and juvenile officers and feminine presiding officers of marital relations and moral courts carrying out the orders of men "may come to be a travesty on what women charged with responsibility could accomplish."

The final session of the council today discussed plans for the new bureau of political education for women voters. Miss Helen Todd of San Francisco was placed in charge of the bureau, which will undertake to mold into a cohesive body the constantly increasing number of feminine voters in this country.

Addams speaks at the National Convention of Women about the benefits of suffrage for women in America.