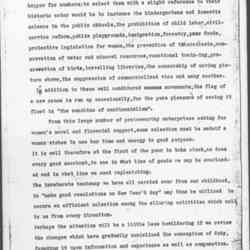 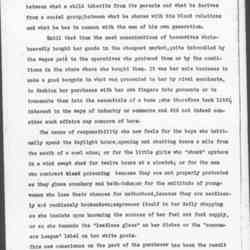 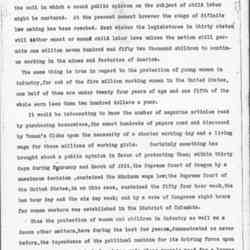 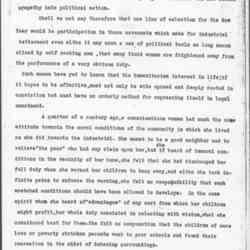 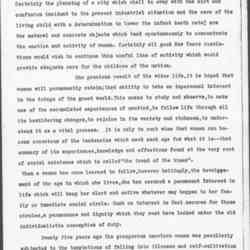 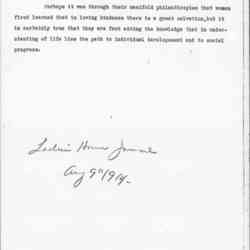 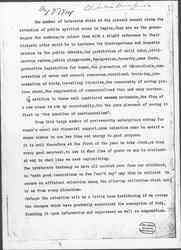 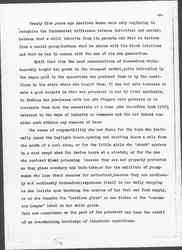 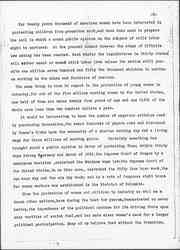 The number of interests which at the present moment claim the attention of public spirited women is legion, they are as the grasshopper for numbers; to select them with a slight reference to their historic order would be to instance the kindergartens and domestic science in the public schools, the prohibition of child labor, civil-service reform, public playgrounds, immigration, forestry, pure foods, protective legislation for women, the prevention of tuberculosis, conservation of water and mineral resources, vocational training, preservation of birds, [traveling] libraries, the censorship of moving picture shows, the suppression of commercialized vice and many another.

In addition to these well considered movements, the flag of a new cause is run up occasionally, for the pure pleasure of seeing it float in "the sunshine of sentimentalism."

From this large number of praiseworthy enterprises asking for woman's moral and financial support, some selection must be made if a woman wishes to use her time and energy to good purpose.

It is well therefore at this first of the year to take stock, as does every good merchant, to see in what line of goods we may be overloaded and in what line we need replenishing.

The inveterate tendency we have all carried over from our childhood, to "make good resolutions on New Year's day" may thus be utilized to secure an efficient selection among the alluring activities which call to use from every direction.

Perhaps the situation will be a little less bewildering if we review the changes which have gradually socialized the conception of duty, founding it upon information and experience as well as compunction. [page 2]

Twenty five years ago American women were only beginning to recognize the fundamental difference between individual and social; between what a child inherits from its parents and what he derives from a social group; between what he shares with his blood relations and what he has in common with the men of his own generation.

Until that time the most conscientious of housewives whole-[heartedly] bought her goods in the cheapest market, quite untroubled by the wages paid to the operatives who produced them or by the conditions in the store where she bought them. It was her sole business to make a good bargain in what was presented to her by rival merchants, to fashion her purchases with her own fingers into garments or to transmute them into the essentials of a home; she therefore took little interest in the ways of industry of commerce and did not indeed consider such affairs any concern of hers.

The sense of responsibility she now feels for the boys who habitually spend the daylight hours, opening and shutting doors a mile from the mouth of a coal mine; or for the little girls who "shuck" oysters in a wind swept shed for twelve hours at a stretch; or for the men who contract [blood] poisoning because they are not properly protected as they glaze crockery and bath-tubs; or for the multitude of young-women who lose their chances for motherhood, because they are needlessly and recklessly brokendown; expresses itself in her daily shopping as she demands the "leadless glaze" on her dishes or the "consumers League" label on her white goods.

This new conscience on the part of the purchaser has been the result of an overwhelming knowledge of industrial conditions. [page 3]

For twenty years thousands of American women have been interested in protecting children from premature work, and have done much to prepare the soil in which a sound public opinion on the subject of child labor might be nurtured. At the present moment however the stage of definite law making has been reached. Next winter the legislatures in thirty states will either enact or amend child labor laws unless the nation still permits one million seven hundred and fifty two thousand children to continue working in the mines and factories of America.

The same thing is true in regard to the protection of young women in industry, for out of the five million working women in the United States, one half of them are under twenty four years of age and one fifth of the whole earn less than two hundred dollars a year.

It would be interesting to know the number of magazine articles read by purchasing housewives, the exact hundreds of papers read and discussed by Women's Clubs upon the necessity of a shorter working day and a living wage for these millions of working girls. Certainly something has brought about a public opinion in favor of protecting them; within thirty days during February and March of 1914, the Supreme Court of Oregon by a unanimous decision, sustained the Minimum wage law; the Supreme Court of the United States, in a Ohio case, sustained the fifty four hour week, the ten hour day and the six day week; and by a vote of Congress eight hours for women workers was established in the District of Columbia.

Thus the protection of women and children in industry as well as a dozen other matters, have during the last few years, demonstrated as never before, the dependence of the political machine for its driving force upon many varieties of social fuel, and has made clear woman's need for a larger political participation. Many of us believe that without the franchise, [page 4] women will be shut out of the game -- a game played all over the world -- by statesmen who at this moment are attempting to translate the new social sympathy into political action.

Shall we not say therefore that one line of selection for the New Year would be participation in those movements which make for industrial betterment even [although] it may mean a use of political tools so long monopolized by self seeking men, that many timid women are frightened away from the performance of a very obvious duty.

Such women have yet to learn that the humanitarian interest in life; if it hopes to be effective, must not only be [widespread] and deeply rooted in conviction but must have an orderly method for expressing itself in legal enactment.

A quarter of a century ago, a conscientious woman had much the same attitude towards the moral conditions of the community in which she lived as she did towards the industrial. She meant to be a good neighbor and to relieve "the poor" who had any claim upon her, but if <she> heard of immoral conditions in the vicinity of her home, she felt that she had discharged her full duty when she warned her children to keep away, and [although] she took infinite pains to enforce the warning, she felt no responsibility that such wretched conditions should have been allowed to develop. In the same spirit when she heard of "advantages" of any sort from which her children might profit, her whole duty consisted in selecting with wisdom, what she considered best for them. She felt no compunction that the children of care less or poverty stricken parents went to poor schools and found their recreation in the midst of debasing surroundings.

Is it not true that a double focus for social betterment is being evolved through the town planning endeavor on one hand and the culture of [page 5] child life on the other. They may be called complementary sets of interests. Certainly the planning of a city which shall do away with the dirt and confusion incident to the present industrial situation and the care of the living child with a determination to lower the infant death rate are the natural and concrete objects which tend spontaneously to concentrate the emotion and activity of women. Certainly all good New Year's resolutions would wish to continue this useful line of activity which would provide adequate care for the children of the nation.

One precious result of the wider life, it is hoped that women will permanently retain; that ability to take an impersonal interest in the doings of the great world. This means to study and observe, to make use of the accumulated experiences of mankind, to follow life through all its bewildering changes, to rejoice in its variety and richness, to understand it as a vital process. It is only in such wise that women can become conscious of the tendencies which mark each age for what it is -- that summary of its experiences, knowledge and affections found at the very root of social existence which is called "the trend of the times."

When a woman has once learned to follow, however haltingly, the development of the age in which she lives, she has secured a permanent interest in life which will keep her alert and active whatever may happen to her family or immediate social circle. Such an interest in fact secures for those circles, a permanence and dignity which they must have lacked under the old individualistic conception of duty.

Twenty five years ago the prosperous American woman was peculiarly subjected to the temptations of falling into idleness and self-cultivation. To her credit be it said that she developed an interest in philanthropic [page 6] and industrial affairs not only as a safeguard to herself and her family but as a tremendous [force] for sympathetic and [beneficent] action.

Perhaps it was through their manifold philanthropies that women first learned that in loving kindness there is a great salvation, but it is certainly true that they are fast adding the knowledge that in understanding of life lies the path to individual development and to social progress. Addams expresses why the time is now that women should be able to vote, with in regards to the social power women have which can be used for political power.

Addams has written "Aug 9"1914" and "[illegible] Ladies Home Journal" at the top center of the first page to indicate the date written and the journal the article will be published in. On the bottom of the last page, Addams has also written "Ladies Home Journal Aug 9" 1914."