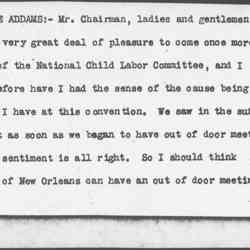 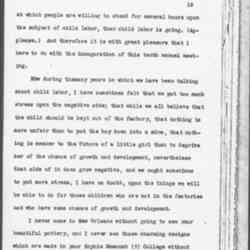 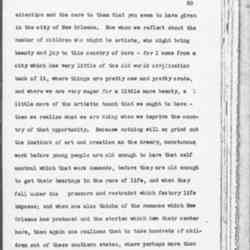 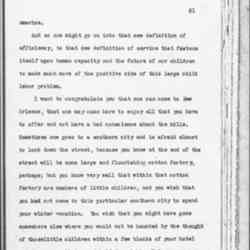 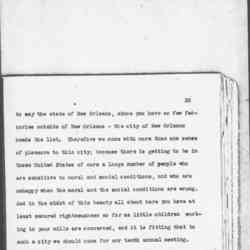 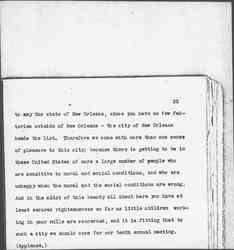 MISS JANE ADDAMS: -- Mr. Chairmen, ladies and gentlemen: It gives me a very great deal of pleasure to come once more to a meeting of the National Child Labor Committee, and I think never before have I had the sense of the cause being so popular as I have at this convention. We saw in the suffrage movement as soon as we began to have out of door meetings that the sentiment is all right. So I should think when the city of New Orleans can have an out of door meeting [page 2] at which people are willing to stand for several hours upon the subject of child labor, then child labor is going. (Applause.) And therefore it is with great pleasure that I have to do with the inauguration of this tenth annual meeting.

Now during the many years in which we have been talking about child labor, I have sometimes felt that we put too much stress upon the negative side; that while we all believe that the child should be kept out of the factory, that nothing is more unfair than to put the boy down into a mine, that nothing is meaner to the future of a little girl than to deprive her of the chance of growth and development, nevertheless that side of it does grow negative, and we ought sometimes to put more stress, I have no doubt, upon the things we will be able to do for these children who are not in the factories and who have some chance of growth and development.

I never come to New Orleans without going to see your beautiful pottery, and I never see those charming designs which are made in your Sophie Newcomb (?) College without wondering why it is that we do not have such artistic centers all over these United States. There is clay [illegible] everywhere which might be wrought into beautiful shapes. Surely there are young people of ability and susceptibility who might be trained everywhere, did we but have the people to give the [page 3] attention and the care to them that you seem to have given in the city of New Orleans. Now when we reflect about the number of children who might be artists, who might bring beauty and joy to this country of ours -- for I come from a city which has very little of the old world civilization back of it, where things are pretty new and pretty crude, and where we are very eager for a little more beauty, a little more of the artistic touch that we ought to have -- then we realize what we are doing when we deprive the country of that opportunity. Because nothing will so grind out the instinct of art and creation as the dreary, monotonous work before young people are old enough to have that self control which that work demands, before they are old enough to get their bearings in the race of life, and when they fall under the pressure and restraint which factory life imposes; and when one also thinks of the romance which New Orleans has produced and the stories which have their center here, then again one realizes that to take hundreds of children out of these southern states, where perhaps more than anywhere else they ought to be out of doors and in the open and to enclose them in the grimy walls of factories, is to deprive this part of the country and therefore all of the country, of that creative power, of that power to transform, to make over life which we so very much need in this dreary [page 4] America.

I want to congratulate you that one can come to New Orleans, that one may come here to enjoy all that you have to offer and not have a bad conscience about the mills. Sometimes one goes to a southern city and is afraid almost to look down the street, because you know at the end of the street will be some large and flourishing cotton factory, perhaps; but you know very well that within that cotton factory are numbers of little children, and you wish that you had not come to this particular southern city to spend your winter vacation. You wish that you might have gone somewhere else where you would not be haunted by the thought of those little children within a few blocks of your hotel grinding away all day and half the night. But one can come to New Orleans with a clear conscience. One can drive up and down its beautiful streets and look at its unique houses without fear or favor; because they have had the report in the Child Labor Committee itself that in all the cites where examination and investigation has been made -- I was going [page 5] to say the state of New Orleans, since you have so few factories outside of New Orleans -- the city of New Orleans heads the list. Therefore we come with more than one sense of pleasure to this city; because there is getting to be in these United States of ours a large number of people who are sensitive to moral and social conditions, and who are unhappy when the moral and the social conditions are wrong. And in the midst of this beauty all about here you have at least secured righteousness so far as little children working in your mills are concerned, and it is fitting that to such a city we should come for our tenth annual meeting. (Applause.) 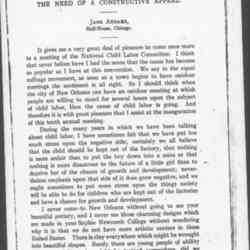 Addams addresses the attendees in the opening speech for the start of the Tenth Annual Conference on Child Labor in New Orleans.