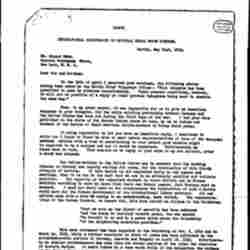 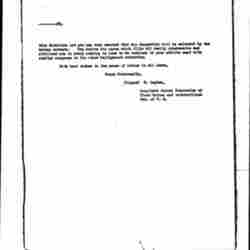 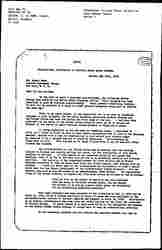 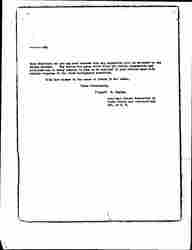 On the 18th of April I received your wireless, the following advice having been added by the Berlin Chief Telegraph Office: -- "This telegram has been permitted to pass by wire exceptionally. Under present conditions, however, it will not be possible of a reply or other private telegrams being sent to America the same way."

Thus, to my great regret, it was impossible for me to give an immediate response to your telegram, for the cable existing previously between Germany and the United States has been cut during the first days of the war. I had your wire published in the whole of the German [labor] press at once, so as to inform our workers of the desire of their American fellow-workers to bring about peace.

It being impossible to let you have an immediate reply, I hesitated to write for I hoped to first be able to meet [labor] representatives of some of the European neutral nations with a view to ascertaining to what extent your mission might be expected to be a success and how it could be organized. Unfortunately my hopes were in vain. This compels me to reply to your wire on my own account, after a month has elapsed.

Our fellow-workers in the United States may be assured that the working classes in Germany are eagerly waiting for peace, for the termination of this bloody struggle of nations. If this desire is not expressed daily in our papers and meetings, then it is due to the fact that we are in an extremely peculiar and delicate position. The majority of the organized workers in Great Britain and in France maintain according to what we learn from their own [labor] papers, that Germany must be smashed. I need not dwell here on the consequences the realization of such a desire would have for the future development of the international [labor] movement. All our efforts made with a view [to] coming to an understanding, have failed. The representatives of the German Workers, on August 4th, 1914 have stated as follows in the Reichstag:

"that as soon as the object of security has been achieved and the enemy is inclined towards peace, the war should be brought to an end by a peace which makes the friendship of the neighboring countries possible."

This same statement has been repeated in the Reichstag on Dec. 2, 1914 and on March 10, 1915, while a further manifesto in favor of peace has been published by the [social democratic] parties of Germany, Austria and Hungary on April 13, 1915. Unfortunately no similar pronouncement has come from our sister parties of the other two countries of Western Europe. It would indeed be a task [worthwhile] if the delegation the workers of the United States intend sending to Europe were to make an understanding possible.

We are extremely thankful for all efforts the American workers may make in [page 2] this direction and you may rest assured that any suggestion will be welcomed by the German workers. The desire for peace which fills all really progressive and civilized men in every country is sure to be realized if your efforts meet with similar response in the other belligerent countries.

With best wishes to the cause of [Labor] in all lands,

Legien tells Bohm about German workers' support for efforts to end the war.