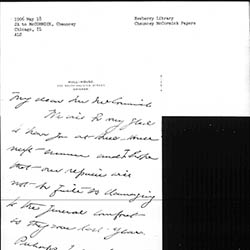 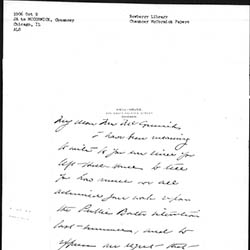 Chauncey Brooks McCormick was the grandson of William Sanderson McCormick, one of the founders of McCormick Harvester. His father, William Grigsby McCormick, founded the Kappa Sigma fraternity. After graduating from Yale in 1905, Chauncey worked in the Paris office of International Harvester. After his wedding in France, McCormick joined the American Expeditionary Forces at the rank of Captain. Following the war, he moved back to America just west of Chicago and became interested in fine arts, staying active in relief efforts in the second World War. In 1925 he became a trustee of the Art Institute of Chicago, and in 1944 he served as president. In 1927 he became chairman of the art committee for the 1933 world's fair known as the Century of Progress. Member of the International Harvester Board of Directors from 1936 until 1954. During World War II he was Chairman of the Commission for Polish Relief.

McCormick married Marion Deering in 1914. They had one son, Brooks McCormick. McCormick died in 1954.

Picture from the Classic Chicago Magazine