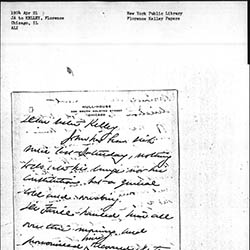 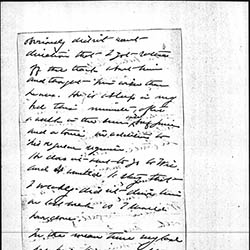 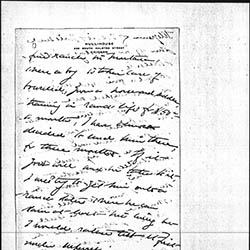 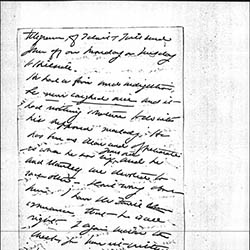 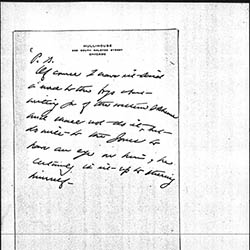 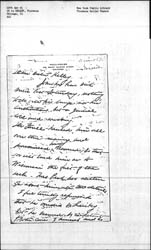 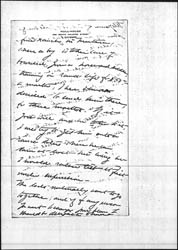 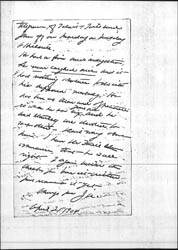 John has been sick since last Saturday, nothing to do with his lungs nor his constitution but a general cold and overdoing.

Dr Favill hauled him all over this morning and pronounced ↑him↓ recovered, so that we will send him on to Wisconsin the first of the week. Mrs Peck has written you about him with the details.

I feel terribly reproached that he overdid so horribly but he seemed so competent to take care of himself and so [page 2] obviously didn't want direction that I got rather off the track about him and thought him wiser than he was. He is asleep in my bed this minute after a walk in the sun ↑and↓ beef juice and a tonic in addition to his regular regimen.

He doesn't want to go to Wis. and so wanted to stay that I weakly didn't drive him on last week as I should have done.

In the mean time my lad has had his usual Spring breakdown, this time rather more so than usual and by Dr. Favill suggestion of a [page 3] fine ranch in Montana, where a boy is taken care of boarded, given a horse and saddle, training in ranch life for $50.00 a month, I have almost decided to send him there for three months. If it goes well and he takes to it, I will try to get him onto a ranch later where he can earn at least his living but I would rather test it first under supervision.

The lads naturally want to go together, and if for any reason you want to change your plans I should be delighted to have a [page 4] telegram, if I don't, I will send John off on Monday or Tuesday to Hillside.

He had a fever and indigestion, he never coughed once and it had nothing whatever to do with his supposed malady. He has been as dear and affectionate as when he was six ↑years old↓ and he and Stanley are devoted to each other. Don't worry about him. I have Dr Favill solemn assurance that he is all right. I again [enclose] the check--you haven't written your name on it yet.

Of course I haven't said a word to the boys about writing you of the western scheme and shall not do it but do write to the Jones to have an eye on him, he certainly isn't up to steering himself. 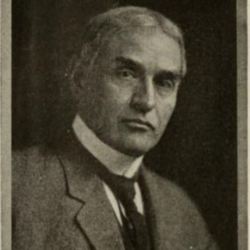 Addams updates Kelley on her son John Kelley's illness, and her decision to send him to a ranch in Montana because he does not want to go to Wisconsin.