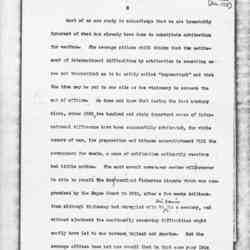 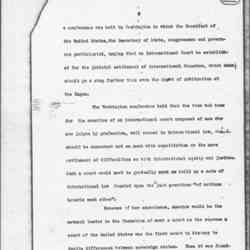 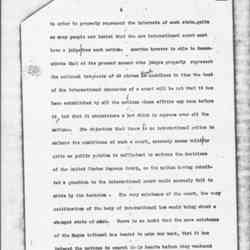 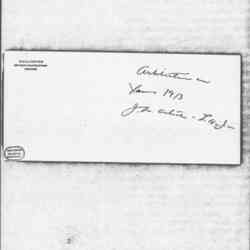 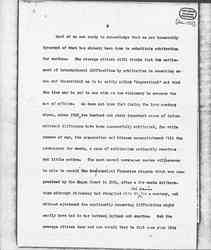 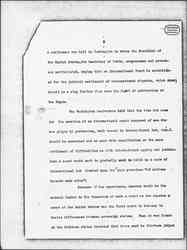 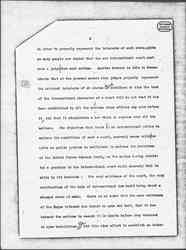 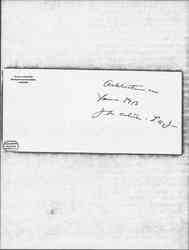 [page 1 missing] Most of us are ready to acknowledge that we are lamentably ignorant of what has already been done to substitute arbitration for warfare. The average citizen still thinks that the settlement of international difficulties by arbitration is something so new and theoretical as to be safely called "impractical" and that the idea may be put to one side as to visionary to concern the men of affairs. He does not know that during the last century alone, since 1815, two hundred and sixty important cases of international difference have been successfully arbitrated, for while rumors of war, its preparation and hideous accomplishment fill the newspapers for weeks, a case of arbitration ordinarily receives but little notice. The most casual newspaper reader will however be able to recall the New Foundland Fisheries dispute which was compromised by the Hague Court in 1910, after a few weeks deliberation although diplomacy had struggled with it <in vain> for a century, and without [adjustment] the continually recurring difficulties might easily have led to war between England and America. But the average citizen does not now recall that in that same year 1910 [page 2] a conference was held in Washington in which the President of the United States, the Secretary of State, congressmen and governors participated, urging that an International Court be established for the judicial settlement of international disputes, which should go a step further than even the Court of Arbitration at the Hague.

The Washington conference held that the time had come for the creation of an international court composed of men who are judges by profession, well versed in international law, which should be concerned not so much with conciliation or the mere settlement of difficulties as with international equity and justice. Such a court would seek to gradually build up a code of international law founded upon the just practices "of nations towards each other".

Because of her experience, America would be the natural leader in the formation of such a court as the supreme court of the United States was the first court in history to decide differences between sovereign states. When it was founded the thirteen states insisted that there must be thirteen judges [page 3] in order to represent the interests of each state, quite as many people now insist that the new international court must have a judge from each nation. America however is able to demonstrate that at the present moment nine judges properly represent the national interests of 48 states to <and> doubtless in time the test of the international character of a court will be not that it has been established by all the notions whose affairs may come before it, but that it administers a law which is supreme over all the nations. The objection that there is no international police to enforce the conditions of such a court, scarcely seems valid for quite as public opinion is sufficient to enforce the decisions of the United States Supreme Court, so the nation having submitted a question to the international court would scarcely fail to abide by its decision. The very existence of the court, the very codification of the body of international law would bring about a changed state of mind. There is no doubt that the mere existence of the Hague tribunal has tended to make war hard, that it has induced the nations to search their hearts before they ventured to open hostilities. 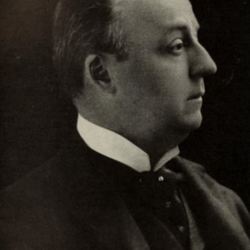 Addams advocates for world peace, arguing the advantages of international arbitration over war.