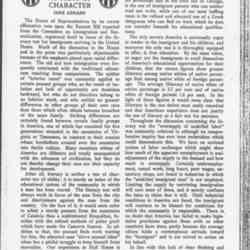 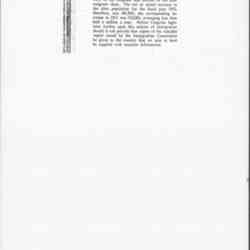 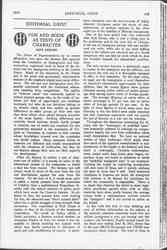 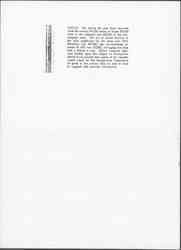 PEN AND BOOK AS TEST OF CHARACTER

The House of Representatives by its recent affirmative vote upon the Burnett Bill reported from the Committee on Immigration and Naturalization, registered itself in favor of the literacy test for immigrants arriving in the United States. Much of the discussion in the House and in the press was particularly objectionable because of the emphasis placed upon racial differences. The old and new immigration were frequently contrasted with the traditional odiousness resulting from comparisons. The epithet of "inferior races" was constantly applied to certain peasant groups who, as the result of isolation and lack of opportunity are doubtless backward, but who do not therefore belong to an inferior stock, and who exhibit no greater differences to other groups of their own race than those which often obtain between branches of the same family. Striking differences are certainly found between certain family groups in America, one of which has remained for five generations stranded in the mountains of Virginia or Tennessee, in contrast to their cousins whose forefathers crossed over the mountains into fertile valleys. Many mountain whites of America are illiterate and totally unacquainted with the advances of civilization, but they do not thereby change their race nor their capacity for development.

After all, literacy is neither a test of character nor of ability; it is merely an index of the educational system of the community in which a man has been reared. The literacy test will always work in favor of the man from the city and discriminate against the man from the country. On the face of it, it would seem safer to admit a sturdy peasant from the mountains of Calabria than a sophisticated Neapolitan, familiar with the refined methods of police graft which have made the Camorra famous. In addition to that, the peasant finds work waiting for him, the educated man "above manual labor" often has a pitiful struggle to keep himself from starvation. Our experience at Hull House is similar to that of the friends of the immigrant everywhere. We recall an Italian editor, a Greek professor, a Russian medical student, an Armenian Master of Arts, for whom it was impossible to obtain anything but manual work which they finally undertook in bitterness of spirit and with insufficiency of muscle. A settlement constantly sees the deterioration of highly educated foreigners under the strain of maladjustment, in marked contrast to the often rapid rise of the families of illiterate immigrants.

One of the most gifted boys ever connected with Hull House, who is now a rising man in his profession and in the civic life of Chicago, is the son of immigrant parents who can neither read nor write, while one of our most baffling cases is the refined and educated son of a Greek clergyman who can find no work which he does not consider beneath his educational qualifications.

The only service America is universally eager to render to the immigrant and his children, and moreover the only one it is thoroughly equipped to offer, is free education. By the same token, so eager are the immigrants to avail themselves of America's educational opportunities for their children, that the census figures show greater illiteracy among native whites of native parentage than among native white of foreign parentage. The average illiteracy of native white of native parentage is 5.7 [percent] and of native white of foreign parents 1.6 [percent]. In the light of these figures it would seem clear that illiteracy is the one defect most easily remedied and that American experience does not justify the use of literacy as a fair test for entrance.

Throughout the discussion concerning the literacy test the "oversupply of unskilled labor" was constantly referred to although no comprehensive inquiry has ever been undertaken which could demonstrate this. We have no national system of labor exchanges which might show how much of the apparent unemployment is maladjustment of the supply to the demand and how much is oversupply. Certainly underemployment, casual work, long hours, poor wages, unsanitary shops, are found in industries in which the "unskilled immigrant man" is not employed. Limiting the supply by restricting immigration will cure none of these, and it merely confuses the issue to claim that it will. Until industrial conditions in America are faced, the immigrant will continue to be blamed for conditions for which the community is responsible. There is no doubt that America has failed to make legislative provisions against those evils as other countries have done, partly because the average citizen holds a contemptuous attitude toward the "foreigner" and is not stirred to action on his behalf.

In line with this lack of clear thinking and even of definite information on the subject, is the constant assertion commonly made that one million immigrants a year are coming into this country; yet Secretary Nagel's annual report for the fiscal year ending June 30, 1912, shows that in the year 838,172 immigrants and 178,983 non-immigrant aliens entered. The total of these is [page 2] 1,017,155. But during the year there departed from the country 615,292 aliens, of whom 333,262 were of the emigrant and 282,030 of the non-emigrant class. The net or actual increase in the alien population for the fiscal year 1912, therefore, was 401,863; the corresponding increase in 1911 was 512,085, averaging less than half a million a year. Before Congress legislates further upon this subject of immigration should it not provide that copies of the valuable report issued by the Immigration Commission be given to the country that we may at least be supplied with accurate information.

Addams provides an argument against literacy tests for immigrants, proposed by the Burnett Bill recently pased by the U.S. House of Representatives.