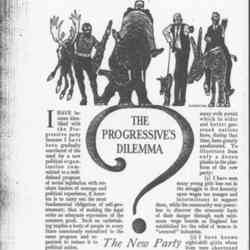 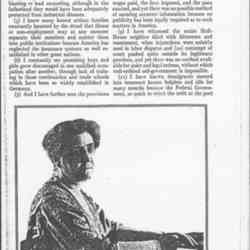 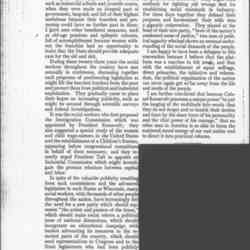 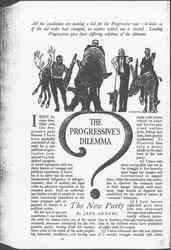 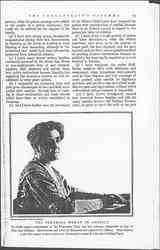 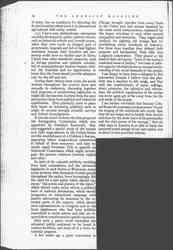 All the candidates are making a bid for the Progressive vote -- it looks as if the old order had changed, no matter which one is elected. Leading Progressives give their differing solutions of the dilemma

I HAVE become identified with the Progressive party because I have been gradually convinced of the need for a new political organization committed to a well-defined program of social legislation with resolute leaders of courage and political experience, if America is to carry out the most fundamental obligation of self-government; that of making the legal order an adequate expression of the common good. Such an undertaking implies a body of people in every State consciously committed to the same program and organized to reduce it to political action.

By the test of my own experience I can confirm the need for almost every one of the social economic measures advocated by the Progressive party; having lived for twenty-three years in the midst of the most perplexing industrial conditions, and having seen many evils persist which in older and better governed nations have, during that time, been greatly ameliorated. To illustrate from only a dozen planks in the platform of the new party:

(I) I have seen many young girls lose out in the struggle to live honestly upon wages too [meager] and intermittent to support them, while the community was powerless to discover the economic basis of their danger through such minimum wage boards as England has established for the relief of women in "sweated" industries.

(2) I have known night-shift girls whose lives were shortened through sheer exhaustion totally without protection in America, although twenty-nine countries of the civilized world have prohibited all night work for women.

(3) I have witnessed the wife and children of a convict struggle unaided with bitter [page 2] poverty while his prison earnings were added to the profits of a prison contractor, but could not be utilized for the support of his family.

(4) I have seen strong young immigrants incapacitated during their first three months in America, as the result of working in sand blasting or lead enameling, although in the fatherland they would have been adequately protected from industrial diseases.

(5) I know many honest artisan families constantly haunted by the dread that illness or non-employment may at any moment separate their members and scatter them into public institutions because America has neglected the insurance systems so well established in other great nations.

(6) I constantly see promising boys and girls grow discouraged in one unskilled occupation after another, through lack of training in those continuation and trade schools which have been so widely established in Germany.

(7) And I have further seen the provisions of the Illinois Child-Labor Law menaced by nation-wide combinations of capital, because there is no Federal control in regard to the premature labor of children.

(8) I have lived through periods of strikes and labor disturbances, when the wildest assertions were made as to the amount of wages paid, the fines imposed, and the pace exacted, and yet there was no possible method of securing accurate information because no publicity has been legally required as to such matters in America.

(9) I have witnessed the entire Hull-House neighbor filled with bitterness and resentment, when injunctions were unfairly used in labor disputes and (10) contempt of court pushed quite outside its legitimate province, and yet there was no method available for quiet and legal redress, without which well-ordered self-government is impossible.

(11) I have known immigrants massed into tenement houses helpless and idle for many months because the Federal Government, so quick to reject the unfit at the port

[image Photograph from Eva Watson Schutze
THE FOREMOST WOMAN IN AMERICA
No single [endorsement] of the Progressive Party has had influence comparable to that of Miss Jane Addams. She is known and loved by thousands and respected by millions. Miss Addams is the first woman to have a place on the executive board of a National Political Party.] [page 3]

of entry, has no machinery for directing the fit into localities where labor is in demand and agricultural skill sorely needed.

(12) I have seen philanthropic enterprises carefully developed by public-spirited women, such as industrial schools and juvenile courts, when they were made an integral part of government, languish and fail of their highest usefulness because their founders and promoters could have no further part in them; I have seen other beneficent measures, such as old-age pensions and epileptic colonies, fail of accomplishment because women without the franchise had no opportunity to insist that the State should provide adequate care for the old and sick.

During these twenty-three years the social workers throughout the country have met annually in conference, discussing together such programs of ameliorating legislation as might lift the heaviest burdens from the poor and protect them from political and industrial exploitation. They gradually came to place their hopes on increasing publicity, such as might be secured through scientific surveys and federal investigations.

It was the social workers who first proposed the Immigration Commission which was appointed by President Roosevelt; they also suggested a special study of the women and child wage-earners in the United States and the establishment of a Children's Bureau, appearing before congressional committees in behalf of these measures; and they recently urged President Taft to appoint an Industrial Commission which might investigate the protean relations between capital and labor.

In spite of the valuable publicity resulting from such commissions and the advanced legislation in such States as Wisconsin, many social workers, with thousands of other people throughout the nation, have increasingly felt the need for a new party which should represent "the action and passion of the times," which should make social reform a political issue of national dimensions, which should inaugurate an educational campaign with leaders advocating its measures to the remotest parts of the country, which should send representatives to Congress and to the State legislatures who had been publicly committed to social reform and who are responsible to constituents for specific measures.

Only such a party could crystallize the advanced public sentiment to be found in various localities, and make of it a force for national progress.

A few weeks ago a great convention in Chicago brought together from every State in the Union men and women haunted by the same social compunctions, animated by like hopes, revealing to each other mutual sympathies and memories. They urged tried methods for righting old wrongs and for establishing social standards in industry. For three days together they defined their purposes and harmonized their wills into a gigantic [cooperation]. They placed at the head of their new party, "born of the nation's awakened sense of justice," two men of political sagacity who had shown an unusual understanding of the social demands of the people.

I am happy to have been a delegate to this convention because I believe that the platform was a reaction to felt needs, and that with the establishment of equal suffrage, direct primaries, the initiative and referendum, the political organization of the nation can never again get so far away from the life and needs of the people.

I am further convinced that because Colonel Roosevelt possesses a unique power "to put the longing of the multitude into words that they do not forget and to banish their doubts and fears by the sheer force of his personality and the vital power of his courage," that no other man in America is so able to focus the scattered moral energy of our vast nation and to direct it into practical reforms.

Addams defends the planks of the Progressive Party's platform by giving evidence from her experience.