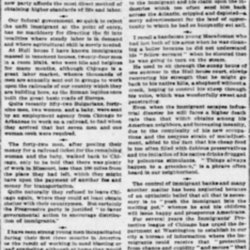 Jane Addams Tells of Progressive Plans to Protect the Immigrants.

IN his great speech before the Chicago convention Col. Roosevelt said: "The first charge on the industrial statesmanship of the day is to prevent human waste; the dead weight of orphanage and depleted craftsmanship, of crippled workers ... of casual labor, of insecure old age, are so many strains upon the national structure."

Because the Progressive party formally pledges itself to legislation which shall in time mitigate the industrial evils in America, as they have already been lessened in other countries, many of us have identified ourselves with it. We are convinced that the new party affords the most direct method of obtaining higher standards of life and labor.

Our federal government, so quick to reject the unfit immigrant at the point of entry, has no machinery for directing the fit into localities where steady labor is in demand and where agricultural skill is sorely needed.

At Hull house I have known immigrants massed in tenement houses, twenty-four men in a room 10x14, who were idle and helpless for many months, although Chicago is a great labor market, whence thousands of men are annually sent out in groups to work upon the railroads of our country which they are building here, as the Roman legions once built the great basic roads of Europe.

Quite recently fifty-two Bulgarians, forty-nine men, two women and a baby, were sent by an employment agency from Chicago to Arkansas to work on a railroad, to find when they arrived that but seven men and one woman cook were required.

The forty-two men, after pooling their money for a railroad ticket for the remaining woman and the baby, walked back to Chicago, only to be told that there was plenty of work in Missouri, less than 100 miles from the place they had left, which they might have upon the payment of another fee and money for transportation.

Quite naturally they refused to leave Chicago again, where they could at least obtain shelter with their countrymen. But certainly the Progressive party is justified "to favor governmental action to encourage distribution of immigrants."

I have seen strong young men incapacitated during their first three months in America as the result of working in sand blasting or lead enameling, although at home they would have been adequately protected from industrial diseases.

The immigration authorities at Ellis Island are most careful not to admit "contract labor" lest the great corporations profit thereby at the expense of the American workingman, but the government has not yet insisted that these same corporations shall bear the economic loss of the men who are seriously injured or killed in their employ or that human waste shall automatically involve a reduction of profits.

Of the 2,511 miners killed in America last year, a surprising number were immigrants. Although no systems of safeguards in the world have been so carefully worked out as those which apply to mines, only thirty-two states have legislation on the subject.

While the state of Wisconsin for a year and Illinois for three months have successfully operated an employers' liability law, and while much may be hoped for the "hygiene of occupation" from the international congress to be held in Washington next October, the platform of the Progressive party insures the popular discussion of the matter throughout the land, until the wanton destruction of thousands of young men who are killed every year through lack of [well-known] safeguards shall be a barbarism of the past.

Such undertakings do not of necessity imply more federal authority, although it is obviously necessary in certain directions, but it does postulate a body of people in every state who understands our indebtedness to the immigrant and his claim upon the industries which too often send him back across the Atlantic, crippled and depleted -- a sorry advertisement for the land of opportunity to which he had so buoyantly set sail.

I recall a handsome young Macedonian who had lost both of his arms when he was cleaning a boiler because he did not understand his "fellow servant" when he shouted that he was going to turn on the steam.

He used to sit through the sunny hours of one summer in the Hull house court, slowly recovering his strength that he might go back to his native hills, a shepherd without a crook, hoping to control his sheep through his voice, which was wonderfully sweet and penetrating.

Even when the immigrant escapes industrial disaster he still faces a higher death rate than that which obtains among his American neighbors, and increasing insanity, due to the complexity of his new occupations and the nervous strain of maladjustment, added to the fact that his cheap food is too often filled with dubious preservatives and the imitation of his native drinks drugged by poisonous stimulants. "Things always happen to a greenhorn," is a phrase often heard in our neighborhood.

For several years the Immigrants' Protective League of Chicago has urged the department at Washington to establish in our city a bureau of information where the immigrants could receive that "protection from chance and cupidity" and secure "that larger share of American opportunity" which the platform of the Progressive party pronounces so essential.

"A national public health service," which is also advocates, would devise some practical scheme of inspection and supervision of those labor camps and crowded lodging houses in which thousands of immigrants who come to us in good health and with decent habits so often contract disease and vicious practices.

Unless some systematic effort is made on their behalf, these large groups of future citizens will not only lose their own health and virtue but become a menace to the entire community.

Will America be slower than the European powers to protect its industrial citizens, and shall we continue to allow sturdy immigrants slowly to deteriorate because, having crossed the sea, according to our domestic theory they do not need protection? 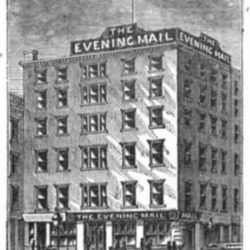 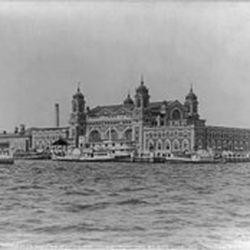 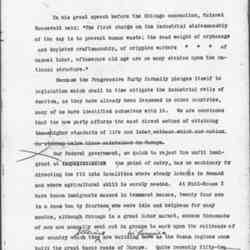 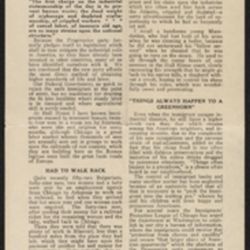