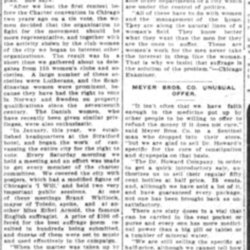 Miss Jane Addams, of Hull House, who is chairman of the committee for procuring municipal suffrage for the women of Chicago, champions the cause on the grounds that women are more vitally interested in the comforts of the home and the schools and know what is needed better than the men. She says the United States is behind the other Anglo-Saxon countries in the matter of general suffrage and insists that the progress of the race depends on the adoption of the plan. She says:

"After we lost the first contest before the Charter convention in Chicago two years ago on a tie vote, the women decided that the organization to fight for the movement should be more representative, and together with the activity shown by the club women of the city we began to interest other organizations. The result was in a short time we gathered about us delegates from 110 women's clubs and societies. A large number of these societies were in Lutherans, and the Scandinavian women were prominent because they have had the right to vote in Norway and Sweden on property qualifications since the seventeenth century. The Danish women, who have recently been given similar privileges were also enthusiastic.

"In January, this year, we established headquarters at the Stratford hotel, and began the work of canvassing the entire city for the right to vote. Every Saturday morning we held a meeting and an effort was made to get every member of the charter committee. We covered the city with posters, which had a modified figure of Chicago's 'I Will,' and held two very important public sessions. At one of these meetings Brand Whitlock, mayor of Toledo, spoke and at another Miss Ethel Arnold, the famous English suffragist. A prize of $100 offered for the best suffrage poem resulted in hundreds being submitted and dozens of them were set to music and used effectively in the campaign.

"When the matter was taken up by the charter committee in convention the women won by a vote of twenty to eleven. During the discussion it was said that the United societies opposed our plans on the plea that women would vote for temperance. This intimation was the result of one of the stirring incidents of a the controversy, and when Miss Reid, of the Chicago school teachers, claimed before the Chicago Woman's club that 'it was nonsense to believe that women were against the saloon and that they would vote much as the men did, the temperance people were greatly stirred up.

"Broadly speaking she was right, but my observation has been that the greater proportion of women in any community is apt to vote against saloons because they suffer most.

"There are so many things in the management of the city's affairs in which the women are so much better qualified to supervise, that it is necessary to take them into partnership in governmental affairs in order continue to keep in the van of progress. They are more vitally interested than the men in school and the playgrounds, the feeding of the families, the care of the markets, the sanitary conditions, the inspection bureaus, the fire escapes in tenement houses, and the general inspection of congested quarters, the bakeries, and innumerable other departments of the city which are under the control of politics.

"All of these have to do with women and the management of the home. They are along the natural lines of a women's field. They know better what they want than the men for they are ones to suffer. These are women's work for the men never take the interest in them like the woman. That is why we insist that suffrage is the solution of the problem." -- Chicago Examiner. 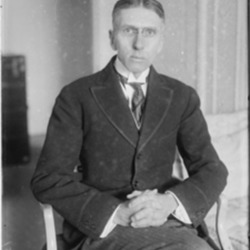 Addams discusses the movement for municipal suffrage for women in Chicago, arguing that it will help improve schools, public health, and sanitation.