The Relation of Club Women to Social Problems, April 15, 1905 (excerpt) 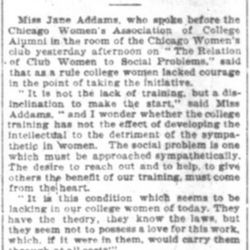 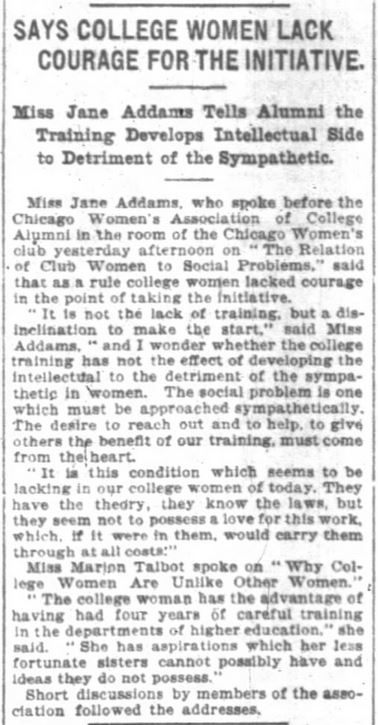 Miss Jane Addams, who spoke before the Chicago Women's Association of College Alumni in the Room of the Chicago Women's club yesterday afternoon on "The Relation of Club Women to Social Problems," said that as a rule college women lacked courage in the point of taking initiative.

"It is not the lack of training, but a disinclination to make the start," said Miss Addams, "and I wonder whether the college training has not the effect of developing the intellectual to the detriment of the sympathetic in women. The social problem is one which must be approached sympathetically. The desire to reach out and to help, to give other the benefit of our training, must come from the heart.

"It is this condition which seems to be lacking in our college women of today. They have the theory, they know the laws, but they seem not to possess a love for this work, which, if it were in them, would carry them through at all costs."

Miss Marion Talbot spoke on "Why College Women Are Unlike Other Women."

"The college woman has the advantage of having had four hears of careful training in the departments of higher education," she said. "She has aspirations which her less fortunate sistes cannot possibly have and ideas they do not possess."

Short discussions by members of the association followed the addresses.

In a speech before the Chicago Women's Association. Addams complains that college women are disinclined toward philanthropy.