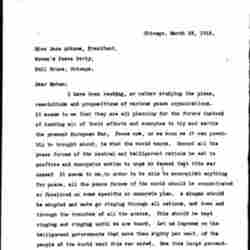 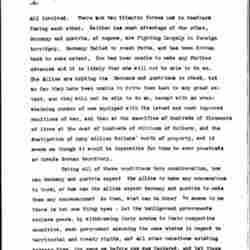 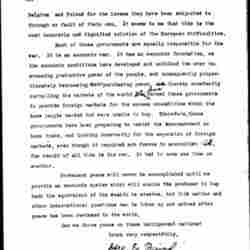 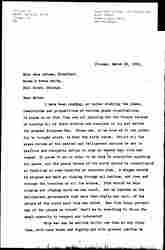 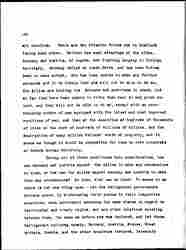 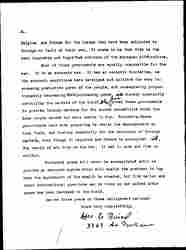 I have been reading, or rather studying the plans, resolutions and propositions of various peace organizations. It seems to me that they are all planning for the future instead of bending all of their efforts and energies to try and settle the present European War. Peace now, or as soon as it can possibly be brought about, is what the world wants. Cannot all the peace forces of the neutral and belligerent nations be set to positive and energetic action to urge or demand that this war cease? It seems to me, in order to be able to accomplish anything for peace, all the peace forces of the world should be concentrated or focalized on some specific or concrete plan. A slogan should be adopted and made go ringing through all nations, and down and through the trenches of all the armies. This should be kept ringing and ringing until we are heard. Let us impress on the belligerent governments that more than eighty [percent] of the people of the world want this war ended. Has this large percentage of the people no voice? Can't we do something to force the small minority to respect our interests?

This war can be settled better now than at any other time, with more honor and dignity, and with greater justice to [page 2] all involved. There are two titanic forces now in deadlock facing each other. Neither has much advantage of the other. Germany and Austria, of course, are fighting largely in foreign territory. Germany failed to reach Paris, and has been driven back to some extent. She has been unable to make any farther advances and it is likely that she will not be able to do so. The Allies are holding the Germans and Austrians in check, but so far they have been unable to drive them back to any great extent, and they will not be able to do so, except with an overwhelming number of men equipped with the latest and most improved munitions of war, and then at the sacrifice of hundreds of thousands of lives at the cost of hundreds of millions of dollars, and the destruction of many million dollars' worth of property, and it seems as though it would be impossible for them to ever penetrate or invade German territory.

Taking all of these conditions into consideration, how can Germany and Austria expect the Allies to make any concessions to them; or how can the allies expect Germany and Austria to make them any concessions? So then, what can be done? It seems to me there is but one thing open -- let the belligerent governments declare peace, by withdrawing their armies to their respective countries, each government assuming the same status in regard to territorial and treaty rights, and all other relations existing between them, the same as before war was declared, and let these belligerent nations, namely, Germany, Austria, France, Great Britain, Russia, and the other countries involved, indemnify [page 3] Belgium and Poland for the losses they have been subjected to through no fault of their own. It seems to me that this is the most honorable and dignified solution of the European difficulties.

Each of these governments are equally responsible for the war. It is an economic war. It has an economic foundation, as the economic conditions have developed and unfolded the ever increasing productive power of the people, and consequently proportionately decreasing their purchasing power [as] thereby constantly curtailing the markets of the world. This <has> forced these governments to provide foreign markets for the excess commodities which the home people needed but were unable to buy. Therefore, these governments have been preparing to resist the encroachment on home trade, and looking constantly for the expansion of foreign markets, even though it required arm forces to accomplish it. The result of all this is the war. It had to come one time or another.

Permanent peace will never be accomplished until we provide an economic system which will enable the producer to buy back the equivalent of the wealth he creates, but this matter and other international questions can be taken up and solved after peace has been restored to the world.

Can we force peace on these belligerent nations?

Baird discusses the status of the various peace movements and the World War. He goes on to suggests the movements need to be globally unified and focus on the present rather than the future, and that the war is the results of oppressive economic systems.